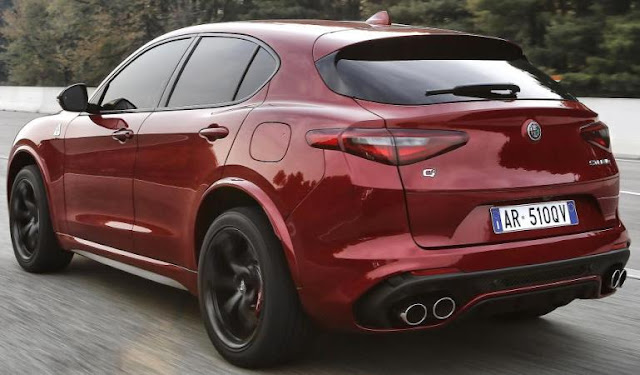 The 2018 Alfa Romeo Stelvio Quadrifoglio is powered by a 505 horsepower all-aluminum, direction-injection 2.9-liter twin-turbocharged V-6 engine paired to an eight-speed automatic transmission all-wheel-drive system taking it from 0-60 mph in an estimated 3.9 seconds to a top speed of 176 mph. Alfa Romeo Stelvio Quadrifogliostarts at $81,590 (including $1,595 destination charge).
Posted by Rich Saxton at 4:44 PM 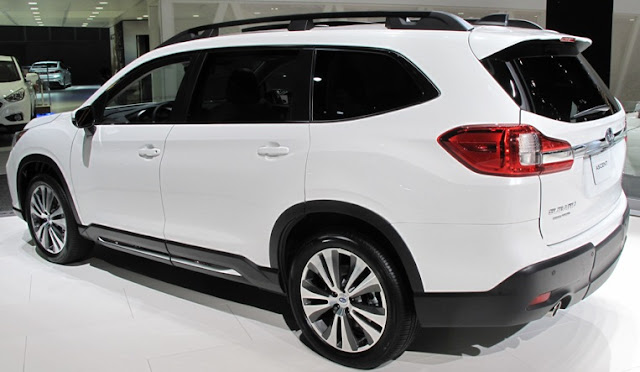 The all-new Subaru Ascent, on a 113.8-in. wheelbase and offering three rows of seating, with available bench or captain’s chairs in the second row, is powered by an all-new 260 horsepower twin-scroll turbocharged 2.4-liter BOXER engine mated to a new version of Subaru’s high-torque Lineartronic® CVT (continuously variable transmission) and Symmetrical All-Wheel Drive. The 2019 Ascent comes standard with EyeSight Driver Assist Technology that includes Automatic Pre-Collision Braking, Adaptive Cruise Control, Lane Departure and Sway Warning, Pre-Collision Throttle Management, and new, available EyeSight Assist Monitor which provides a heads-up display of EyeSight system warnings and system status data on the windshield. Blind Spot Detection with Lane Change Assist and Rear Cross Traffic Alert are also available. The Ascent is priced from $32,970 (including destination and delivery charges) and arrives at retailers this Summer.

The new Volvo V60, five-door mid-size wagon, will be powered by a 250 horsepower T5 FWD or a 316 horsepower T6 AWD in the U.S. The City Safety with Autobrake technology uses automatic braking and detection systems to assist the driver in avoiding potential collisions and the Pilot Assist system supports the driver with steering, acceleration and braking on well-marked roads up to 80 MPH. – has been upgraded with improved cornering performance. The V60 also includes Run-off Road Mitigation, Oncoming Lane Mitigation and other steering assistance systems.
Posted by Rich Saxton at 4:05 PM

The all-new fourth generation 2019 Hyundai Santa Fe, 2.8 inches longer than the previous model, will be powered by a 185 horsepower 2.4-liter inline four-cylinder GDI engine, a 232 horsepower turbocharged 2.0-liter four-cylinder engine or a 200 horsepower 2.2-liter CRDi turbodiesel engine, all mated to a brand new eight-speed automatic transmission. The five-passenger Santa Fe Sport will now be called the Hyundai Santa Fe and the current long wheelbase three-row, seven-passenger Santa Fe will be renamed Santa Fe XL for the 2019 model year. The biggest change sees the rear shock moved upright from an angled position to improve the ride and handling. They go on sale in the U.S. in the summer of 2018. An all-new three-row, eight-passenger SUV is currently under development with an all-new name.
Posted by Rich Saxton at 3:54 PM 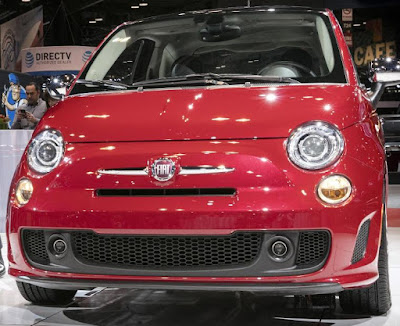 The 2018 Fiat 500 lineup goes all-turbo with Pop and Lounge models powered by the standard 135 horsepower 1.4-liter MultiAir Turbo engine which is 34 more standard horsepower than last year’s model and paired with a five-speed manual transmission as standard with an available six-speed automatic transmission.

The 2018 Fiat 500 Abarth models deliver up to 160 horsepower and customers who purchase or lease a Fiat 500 Abarth also receive, for no additional charge, a one-day high-performance driving session at the legendary Bob Bondurant School of High Performance Driving.

Dealers can order 2018 Fiat 500 vehicles this month, with cars arriving at FIAT studios in the second quarter.
Posted by Rich Saxton at 8:35 AM

The 2018 Sonata Hybrid has a 154 horsepower 2.0-liter Nu GDI four-cylinder engine coupled with a six-speed automatic transmission that houses a 51 horsepower 38 kW electric motor for system net power of 193 horsepower. Sonata Hybrid SE has preliminary internal estimates of 39 mpg in the city, 45 mpg on the highway and 42 mpg combined and total range is estimated at more than 650 miles under typical driving conditions. The 2018 Hybrid will be available in the first quarter

The Sonata Plug-in Hybrid gets an EPA-estimated all-electric range of up to 27 miles with a 9.8 kWh lithium-ion polymer battery pack, more than five times larger than the Sonata Hybrid’s battery, and it can recharge in less than three hours with a level-two charger. The total estimated range is 590 miles.The 2.0-liter Nu four-cylinder GDI engine coupled with the 50 kW electric motor has a total system output of 202 horsepower and the Plug-in Hybrid operates just like the Sonata Hybrid once the onboard battery charge is depleted. The Sonata Plug-in Hybrid uses a six-speed automatic transmission with Hyundai’s Transmission-Mounted Electrical Device. The Plug-in will be available in the second quarter.

New Hyundai Santa Fe Will Debut In Geneva In March 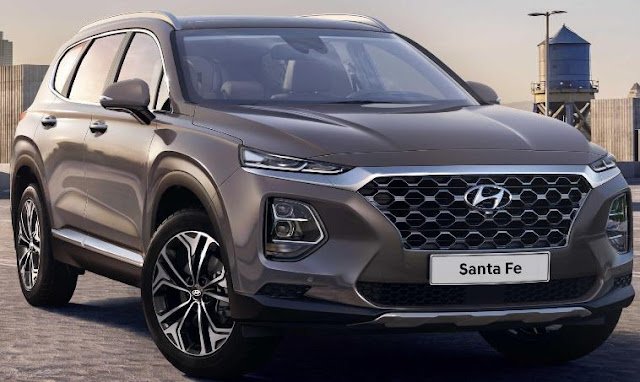 The new fourth generation Hyundai Santa Fe, which sits on a longer wheelbase, offers Rear Cross-Traffic Collision-Avoidance Assist to not only warn the driver if vehicles approach from the side but also applies the brakes automatically, and Safety Exit Assist prevents accidents when vehicles approach from behind by temporarily locking the doors, so that passengers will exit the car safely. Further details of the new generation Santa Fe will be disclosed at the world premiere before making its debut at the Geneva Motor Show in March.
Posted by Rich Saxton at 7:47 AM