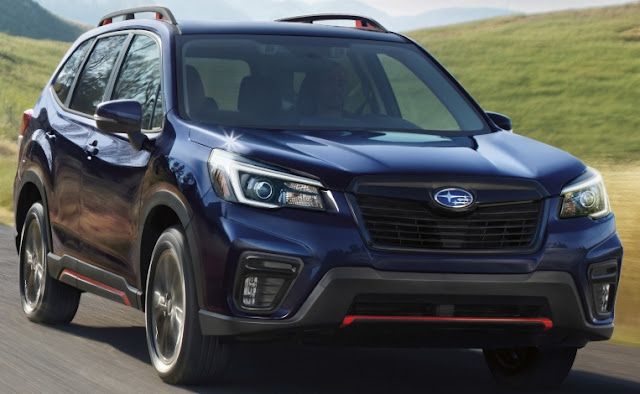 The 2021 Subaru Forester compact SUV, in it’s fifth-generation, is powered by a 182 horsepower 2.5-liter SUBARU BOXER® engine teamed with a Lineartronic® CVT and Subaru Symmetrical All-Wheel Drive delivering up to 33 mpg EPA-estimated highway fuel economy. The 2021 Forester (Base), which comes with the SUBARU STARLINK™ 6.5-inch Multimedia Plus system with high-resolution touchscreen and offers up to 1,500-lb. towing capacity with standard Trailer Stability Assist, is priced at $25,845 (including $1.050 destination & delivery). In addition to the Base, Forester has Premium, Sport, Limited and Touring trim levels. New for 2021, the Premium comes with Keyless Access with Push-Button Start and fog lights as standard equipment. 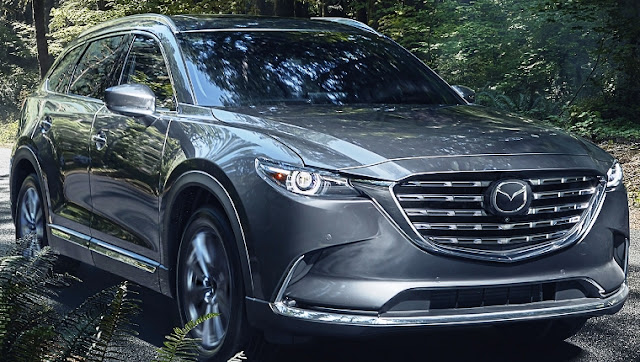 The 2021 Mazda CX-9, three-row midsize crossover SUV powered by a 250 horsepower Skyactiv-G 2.5 Turbo engine paired with a six-speed Skyactiv-Drive automatic transmission, receives new exterior designs, new seat patterning and a 10.25-inch large center display with the latest Mazda Connect infotainment interface. The 2021 Mazda CX-9 Sport FWD starts at 35,060 (including $1,100 for destination and handling). In addition to the Sport, the CX-9 comes in Touring with available Touring Premium Package, Carbon Edition, Grand Touring and Signature trim levels and will arrive in dealerships later this month. Mazda’s predictive i-Activ all-wheel drive with off-road traction assist is standard in CX-9 Signature and available on all other trim levels. 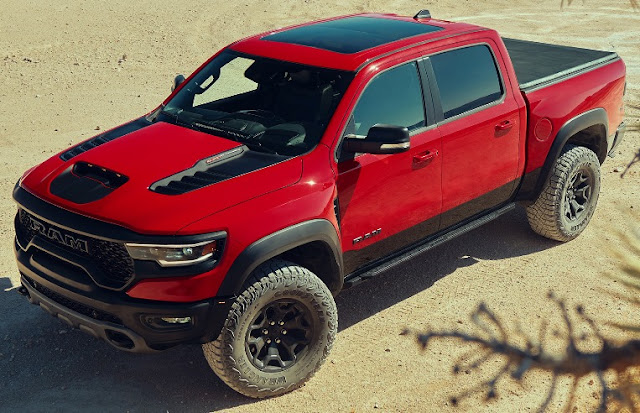 2021 Ram 1500 TRX, 8 inches wider when compared to the rest of the Ram 1500 lineup, is powered by a 702 horsepower 6.2-liter supercharged HEMI® V-8 engine combined with a high-torque-capacity TorqueFlite eight-speed automatic transmission that takes the Ram TRX 0-60 mph in 4.5 seconds to a top speed of 118 mph. New front and rear 2.5-inch Bilstein Black Hawk e2 adaptive performance shocks were designed exclusively for TRX and go with a five-link coil suspension. An all-new Head-up Display unit makes its FCA vehicle debut with the first FCA application of Drive Modes and Off-Road Pages with the Uconnect 4C NAV 12-inch touchscreen. The new Baja drive mode calibrates four-wheel-drive and steering systems, stability control, paddle shifters and suspension for ultimate desert performance, delivering maximum capability on undulating, loose surfaces. An available digital rearview mirror replaces the traditional rearview mirror with a 9.2-inch-wide LCD monitor. The 2021 Ram TRX benefits from up to 32 inches of water fording, up to 8,100 pounds towing and a maximum payload capacity of 1,310 pounds.
Posted by Rich Saxton at 6:12 PM

The 2021 Lexus LX 570 is powered by a 383-horsepower 5.7-liter V8 engine mated to an 8-speed automatic transmission that routes power to LX’s full-time four-wheel-drive system, which includes a Torsen® limited-slip center differential (with electronic-locking center differential). The LX is rated to tow up to 7,000 lbs. For 2021, the LX adds Amazon Alexa compatibility and an updated Sport Package, available only on the 3-row model. There’s an available Rear Seat Entertainment System with dual 11.6-inch screens, second-row HDMI input, and wireless headphones. All LX 570s come equipped with Lexus Safety System +, as well as, Blind Spot Monitor with Rear Cross-Traffic Alert, Panoramic View Monitor and Multi-Terrain Monitor, and Intuitive Parking Assist. Only 500 of the LX Inspiration Series will be produced on LX 3-row only, available in Black Onyx or White Pearl* exterior with Black semi‑aniline leather trim with Rioja Red accents inside.

The Cadillac LYRIQ, based on GM’s next-generation, modular electric vehicle platform, offers beyond 300 miles of range on a full charge (based on internal testing), the latest version of Super Cruise, a hands-free driver assistance feature, available on more than 200,000 miles of compatible highways and recently enhanced to include automated lane change, and a 33-inch-diagonal advanced LED screen the spans the entire viewing area of the driver. 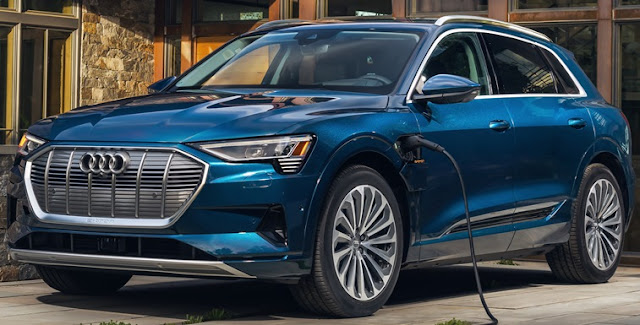 The 2021 Audi e-tron SUV, with 355 horsepower (402 with Boost Mode), starts at $66,995 (including $1,095 destination charge), a decrease of close to $9,000 from the starting MSRP of the model year 2019 Premium Plus e-tron. A potential federal tax credit for purchasing an Audi e-tron or an Audi e-tron Sportback up to $7,500 may apply. The e-tron improves to an EPA-estimated range of 222 miles, an increase of 18 miles while the e-tron Sportback delivers an EPA-estimated range of 218 miles. The Audi e-tron and e-tron Sportback are the first and second fully electric vehicles in the Audi lineup, laddering up to the brand’s commitment to 30 percent of the U.S. model lineup being fully or partially electrified by 2025.

The 2021 Toyota Sienna, in its fourth generation, will be powered by a standard hybrid powertrain achieving 33 MPG with optional all-wheel drive when it goes into full production this Fall in Princeton, Indiana. The new seat frame design has made lifting the folded third-row seats to their upright position much easier.

Jim Farley, 58, has been named the Ford Motor Company’s new president and CEO and will join the board of directors, effective Oct. 1 when Jim Hackett, 65, who has led the company’s transformation since 2017, plans to retire from the company after continuing as a special advisor to Ford through March of 2021.

Farley joined Ford in 2007 as global head of Marketing and Sales and went on to lead Lincoln, Ford South America, Ford of Europe and all Ford global markets in successive roles. In April 2019, Farley was chosen to lead Ford’s New Businesses, Technology & Strategy team. Farley joined Toyota in 1990 in the strategic planning department and served in several product and marketing positions in the United States and Europe. One of Farley’s most noted accomplishments is his responsibility for the successful launch and rollout of Toyota’s new Scion brand. Farley attended Georgetown University and received an MBA from UCLA.
Posted by Rich Saxton at 2:15 PM

The 2021 Mazda3, the fourth generation, is powered by a Skyactiv-G 2.0 engine which will start at $20,845 (including $945 for destination and handling) or an available 186 horsepower Skyactiv-G 2.5 engine with optional i-Activ AWD that starts at $21,445. The Mazda3 2.5 Turbo (pictured above) equipped with an 250 horsepower turbocharged Skyactiv-G 2.5T engine will start at $30,845 when it arrives in dealerships by the end of this year.

The Continental GT Mulliner Convertible, with Bentley's new-generation 4.0-liter, twin‑turbocharged V8 or 6.0-liter, twin-turbocharged W12 powertrains, is the first member of the new Collections portfolio introduced by Bentley Mulliner. Available in the extended Bentley Mulliner paint range of 88 colors, customers wishing to specify their Continental GT Mulliner Convertible in a bespoke shade can commission Bentley’s artisan paint specialists to color-match to any item or sample. It takes almost 400,000 stitches to deliver this quilting across the cabin of the car, with each diamond containing exactly 712 individual stitches – each one precisely aligned to point to the center of the diamond it creates. Developing the embroidery process to deliver this process alone took 18 months. 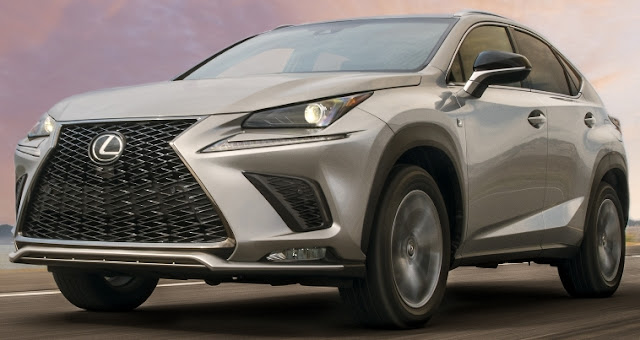 The 2021 Lexus NX 300, powered by a 235 horsepower 2.0-liter four-cylinder engine mated to a  sequential six-speed automatic transmission, will be offered in Nori Green Pearl, have Blind Spot Monitor with Rear Cross Traffic Alert, updated low profile wiper blade design and power-folding auto-dimming reverse tilt mirrors as standard equipment, and the Lexus Safety System+ 2.0. Drivers adds the HomeLink feature to the Navigation option. The 2021 Lexus NX 300h, with Electronic On-Demand All-Wheel-Drive System, achieves 33/city, 30/highway, 31/combined mpg estimates from a 2.5-liter Atkinson cycle four-cylinder engine and a high-torque electric motor combining with a gas engine for 194 system horsepower. The NX also boasts a 4.2-inch Thin Film Transistor LCD in the center of the instrument cluster. The 2021 NX starts at $38,535 (including $1,025 DPH fee) for the FWD model.
Posted by Rich Saxton at 11:03 AM