Toyota, Vindicated By The DOT, Will Launch New Ad Campaign

Toyota will launch "#1 For A Reason", a new advertising campaign on Monday to remind people why Toyota continues to be the top brand consumers turn to when buying a new vehicle. Camry, Corolla, Prius, RAV4 and Tacoma will be featured in the commercials and some of Toyota's bragging will include: Camry being the number-one selling car in America for nine straight years with more than 90 percent of Camrys sold over the past 15 years still on the road today; the Corolla sedan holding the title of best-selling car of all time with more than 8.6 million sold in the U.S. since it launched in 1968 and the Prius being the best-selling hybrid in the world averaging 50 miles per gallon.

Last week, the Department of Transportation (DOT) released results from an unprecedented ten-month study of potential electronics-based causes for unintended acceleration in Toyota vehicles. NASA engineers found no electronic flaws in Toyota vehicles capable of producing the large throttle openings required to create dangerous high-speed unintended acceleration incidents. The two mechanical safety defects identified by NHTSA more than a year ago – “sticking” accelerator pedals and a design flaw that enabled accelerator pedals to become trapped by floor mats – remain the only known causes for these kinds of unsafe unintended acceleration incidents. Toyota has recalled nearly 8 million vehicles in the United States for these two defects and spent billions.

U.S. Transportation Secretary Ray LaHood said, “We enlisted the best and brightest engineers to study Toyota’s electronics systems, and the verdict is in. There is no electronic-based cause for unintended high-speed acceleration in Toyotas." In conducting their report, NASA engineers evaluated the electronic circuitry in Toyota vehicles and analyzed more than 280,000 lines of software code for any potential flaws that could initiate an unintended acceleration incident. Unfortunately, the Egyptian revolt may have buried this news in coverage by the mainstream media who were quick to blast Toyota at the outset of these incidents and do irreparable damage to the Toyota image. 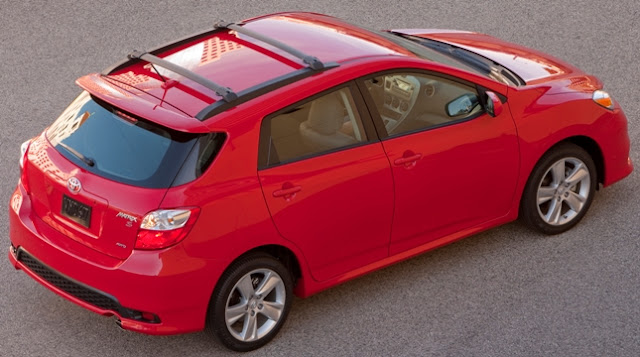 The 2011 Toyota Matrix made its debut at the Chicago Auto Show last week with new standard wheels, interior design features and standard Smart Stop Technology. The 2011 Matrix has a base model with a 132 horsepower 1.8-liter DOHC four-cylinder engine and the sporty S grade has a 158 horsepower 2.4-liter four-cylinder engine. The Matrix has earned an EPA-estimated fuel economy rating of 25 mpg city and 32 mpg highway for the 1.8-liter with the five-speed manual transmission, and 26 mpg city and 32 mpg highway for the 1.8-liter paired with the four-speed automatic transmission.