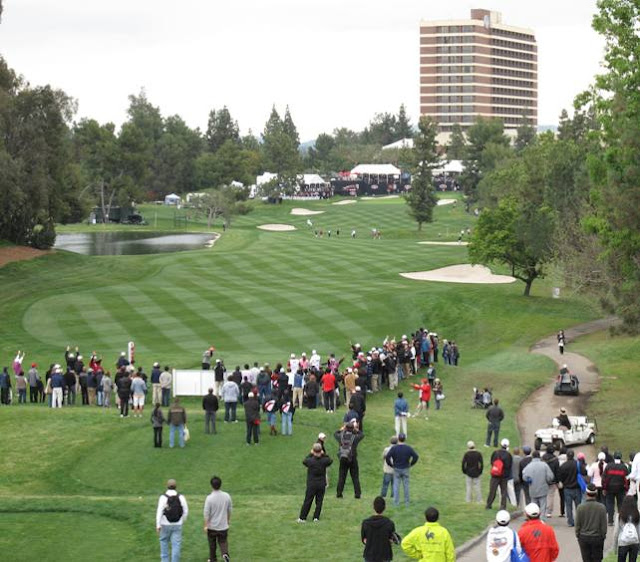 Kia started their LPGA golf tournament sponsorship a year ago at LaCosta Resort & Spa in San Diego's north county and the 2nd annual Kia Classic which just finished today drew a huge gallery despite the 4 inches of rain during the 4-day tournament. Located 30 miles east of downtown Los Angeles, Industry Hills is close to many Asian communities which came out to support the Korean-dominated women's tour. 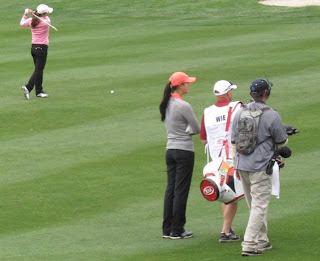 The line-up of players, proximity to Asian communities and a nice $1.7 million purse all pointed to success and, judging by the size of galleries at this Kia Classic, it paid off. The only drawback was the cold rainy weather leaving few golfers in skirts and many in rain gear, like Hawaii's Michelle Wie (pictured wearing the orange cap) who is sponsored by Kia and tied for 7th at 8 under par today. Friday's second round was suspended for 3 hours leaving many to finish their rounds and play their 3rd round on Saturday. If the weather cooperates next year, the Kia Classic could draw even bigger crowds. Kia's sports sponsorships run deep with its  FIFA soccer partnership, Australian Open tennis, NBA basketball and LPGA golf. Kia had a record year in 2010 with sales of 356,268. 2011 sales for January and February of  60,595 is a 31.2 percent gain over the first two months of last year so it looks like the marketing is working. 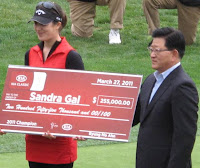 After battling atop the leaderboard all day, it came down to two short putts on the 18th hole by Korea's Jivai Shin and Germany's Sandra Gal. Shin's birdie putt lipped out while Gal sunk the shorter of the two putts for a 16 under par total after 4 rounds good for her first LPGA Tour victory and a check for $255,000. Gal, the first first-time winner on the LPGA Tour this season was ranked 100th coming into event before outlasting number 2 ranked Shin. The Kia Classic comes on the weekend before the ladies' tour first major tournament of the season, the Kraft Nabisco Championship in Rancho Mirage so many top golfers compete as a warm-up to the major which offers $2 million in prize money..
Posted by Rich Saxton at 12:02 AM