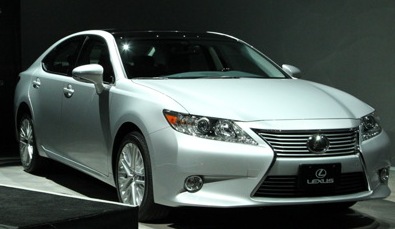 The Lexus ES 350 will be the first Lexus vehicle produced in the United States with Toyota investing $360 million in its Georgetown, Kentucky plant that will generate 750 new jobs to manufacture about 50,000 Lexus vehicles a year bringing the plant's total annual production capacity to more than 550,000 vehicles. It will be the first time the ES will be assembled outside of Japan and production will start in 2015.

Lexus has been manufacturing its popular RX luxury compact SUV in Cambridge, Ontario, Canada, since 2004.
Posted by Rich Saxton at 5:40 AM