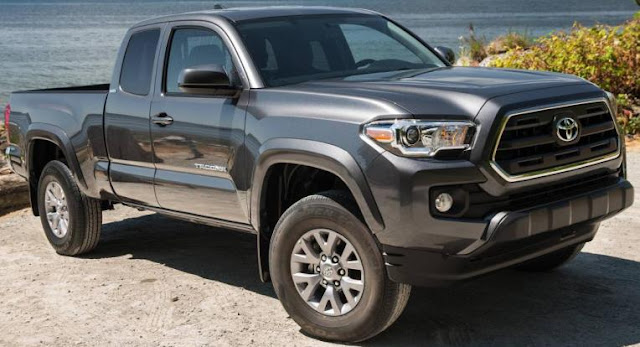 The all-new 2016 Toyota Tacoma (Access cab above) will feature a 159 horsepower 2.7-liter DOHC four-cylinder engine with VVT-i that gets EPA estimated 19 city/23 highway/ 21 combined mpg for the 4x2 with an automatic transmission and Tacoma also offers an all-new 278 horsepower V6 with a 3.5-liter Atkinson cycle with VVT-iW (Variable Valve Timing with Intelligent Wider Intake) equipped with Toyota’s D-4S technology, featuring both direct and port fuel injection getting an estimated 19 city/24 highway/21 combined mpg for the 4x2 automatic. Both engines will be paired with a new six-speed automatic transmission with electronic shift and the V6 can also be mated to a new six-speed manual transmission and the four-cylinder to a five-speed manual.

The Tacoma comes in Access cab or Double cab in SR, SR5, TRD, TRD Sport, TRD Off Road, Limited (double cab only) trims in either two-wheel and four wheel drive with two engine options and mated to a six-speed automatic or new six-speed manual transmission or a five-speed manual for the four-cylinder engine.
Posted by Rich Saxton at 9:33 AM