Another Reuss Rolls In As President of General Motors 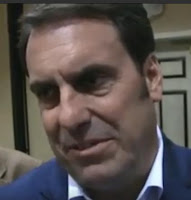 Mark Reuss (left) was just named president of General Motors following a long career at GM that began as a student intern in 1983. Most recently, from June 2018, Reuss was executive vice president and president, Cadillac and global portfolio planning and prior to that was executive vice president, Global Product Development, Purchasing and Supply Chain from 2013-2018. Before that, starting in 2009, Reuss was president of General Motors North America. Reuss was born and raised in Detroit and holds a bachelor’s of engineering degree from Vanderbilt University and a master’s of business administration from Duke University. In 2011, Reuss, as President of GM North America, discussed a changing mindset at General Motors (click hear to see his interview).

His 82 year old father, Lloyd Reuss was President of General Motors Corporation from 1990 until his retirement in January 1993. A mechanical engineering grad from the University of Missouri, the older Reuss joined GM in 1959 and was checking out vehicles at the 2010 North American International Auto Show in Detroit with Richard Saxton (right).
Posted by Rich Saxton at 7:31 PM