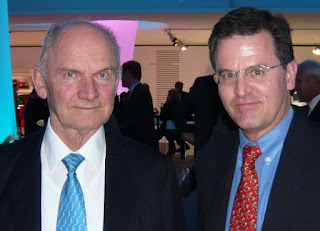 Austrian engineer and automotive executive Ferdinand Karl Piëch, grandson of Ferdinand Porsche, former head of Audi, chairman of the executive board (1993-2002) and chairman of the supervisory board (2002-2015) of Volkswagen Group, passed away August 25th at the age of 82 (pictured left in 2009). Piëch gained notoriety for the development of many vehicles including the Porsche 911, Audi Quattro and Bugatti Veyron. Piëch was named the Car Executive of the Century in 1999, was inducted into the Automotive Hall of Fame in 2014, and in his personal life fathered 12 children with four different women. It was an honor meeting such a car legend at the 2009 Frankfurt Auto Show.