The restyled 2012 C-Class sedan coming in C250, C300 4MATIC and C350 trim levels is scheduled to arrive in the U.S. in the summer of 2011 with the front and rear end "enhanced with a more distinctive design". A total of more than 2,000 new parts distinguish the newest generation of the Mercedes-Benz C-Class from its predecessor. Five new driver assistance systems ranging from the ATTENTION ASSIST drowsiness detection system through to the Blind Spot Assist are now available in the C-Class lineup. New- generation telematics offer new infotainment and navigation features. 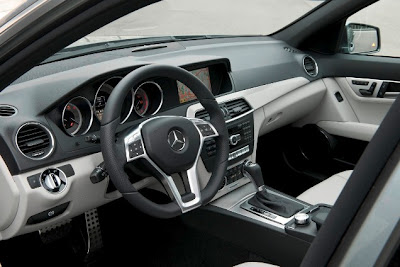 The new V6 gasoline engine in the C350 Sport Sedan features the BlueDIRECT process and now generates 302 horsepower and 273 lb-ft of torque (previously 268 hp and 258 lb-ft), while fuel economy has been improved by 5 percent compared with the outgoing C350 model. The four-cylinder engine is new for the U.S. market featuring direct injection and turbocharger with combined fuel economy of 24 mpg, an improvement of nearly 15 percent compared with the 2011 model year C300 due to all-new direct-injection mated to the redesigned seven-speed automatic transmission with the gear ratios optimized for fuel economy.

The C-Class is Mercedes-Benz's highest volume model range with global sales of more than one million units since its launch in March 2007. Since the market introduction of the first C-Class in 1982, known then as the 190, Mercedes-Benz has sold more than 8.5 million vehicles around the world.