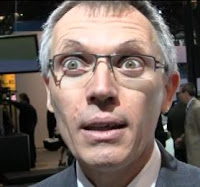 Carlos Tavares is a graduate of Ecole Centrale de Paris. He has spent most of his working life with Renault, where he held a wide range of posts in France, in the Engineering and Programmes division. He joined Nissan in 2004 as Programme Director and then as Vice President, Product Strategy and Product Planning. In 2005 he was appointed Executive Vice President at Nissan, joining the Board of Directors. In 2009 he assumed responsibility for operations at Nissan Americas.

Bill Krueger becomes vice chairman, Nissan Americas, effective June 13.  In this newly formed role Krueger will be Nissan Americas' highest-ranking resident executive and will work closely with Colin Dodge, chairman, Management Committee-Americas. In his new role, Krueger will report to Dodge and be responsible for the day-to-day operations of Nissan Americas' business in the U.S., Canada, Mexico, Brazil and 37 other Latin American and Caribbean countries.
Posted by Rich Saxton at 3:55 PM