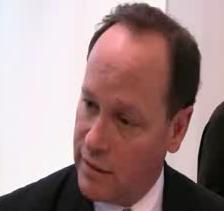 Doug Speck presently holds the position as President of Volvo Cars of North America. He has thirty years of experience from the automotive business, with key positions within Ford Motor Company, Jaguar and Premier Automotive Group.

"Doug Speck will play a very important role for Volvo Car Corporation´s ability to achieve its ambitious growth plan and for the redefinement of the Volvo brand", says Stefan Jacoby, President & CEO of Volvo Car Corporation.
"We will undertake a global review of the entire marketing and sales organisation and Doug Speck will play a major role in this very important work, adds Stefan Jacoby".

"Gerry Keaney has, since he took the role as head of Marketing Sales & Customer Service in 2003, led the global team in a very professional way through difficult times and I wish him all the best in his future career, says Stefan Jacoby".

Doug Speck will take up his new role at Volvo Car Corporation on 1 June.

"I am excited to take on this challenge at a time when Volvo Car Corporation enters a very important growth period in its history", says Doug Speck.

The successor of Doug Speck at Volvo Cars of North America will be subject to a separate announcement shortly.
Posted by Rich Saxton at 5:24 PM