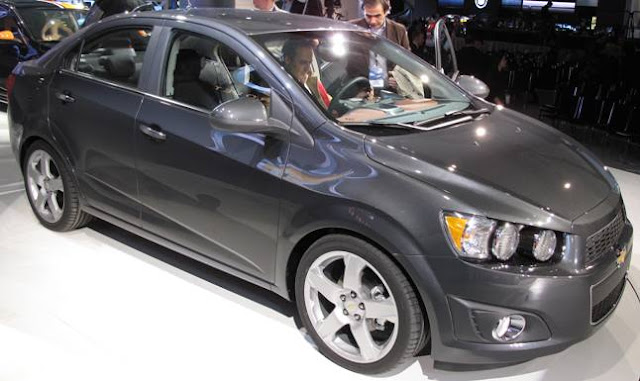 The all-new sub-compact 2012 Chevrolet Sonic will have a starting suggested retail price of $14,495 including destination but excluding tax, title, license and dealer fees for the LS sedan model with a 135 horsepower 1.8L Ecotec engine mated to a five-speed manual transmission. The Sonic is offered in a four-door sedan and a five-door hatchback and in LS, LT and LTZ trim levels.

The 2012 Sonic LT sedan starts at $15,695 sedan and hatchback at $16,495 with added features including a six-speaker premium sound system with CD player, XM Radio with three-month trial subscription, power windows with driver's express up/down and power heated side mirrors. The 2012 Sonic LTZ sedan starts at $17,295 and the hatchback at $17,995 hatchback and includes a connectivity package with a USB port, Bluetooth for select phones and music, steering-wheel-mounted audio controls, heated front seats, cruise control, fog lamps and 17-inch alloy wheels.

Chevy expects the Sonic to boom when comparing its features to the 2011 Fiesta S Sedan and 2011 Honda Fit which have less horsepower, torque and standard features with a smaller trunk, fewer airbags than the Sonic. The Sonic replaces the Aveo which has had an 18 percent increase in sales this year through the end of May so, if gas prices stay high, the Sonic could do very well following its very successful larger new sibling, the Cruze, when it hits the streets this Fall.
Posted by Rich Saxton at 12:06 PM