The J.D. Power and Associates 2011 U.S. Automotive Performance, Execution and Layout (APEAL) Study finds that overall vehicle appeal has reached an all-time high since the study’s inception in 1996 with the recently launched all-new and redesigned models substantially more appealing than their carryover counterparts. The improvement is partially driven by higher ratings for vehicle styling and fuel economy provided by owners of recently launched vehicles.

Also receiving awards are the Chevrolet Volt, Hyundai Equus, Land Rover Range Rover, Lexus IS, MINI Countryman, Nissan Armada, Porsche Cayenne, Scion xB, Suzuki Kizashi and Volkswagen GTI. Of these, the Countryman, Equus and Volt are all-new models, while the Cayenne is redesigned. The Equus achieves the highest APEAL score of any model in the industry in 2011. This is the first year that a model other than the BMW 7 Series, Lexus LS or Mercedes-Benz S-Class has led the overall model ranking.

Three models rank highest in their respective segments in both the 2011 APEAL Study and the 2011 IQS: the Dodge Challenger, Ford F-150 LD and Honda Ridgeline.

Porsche is the highest-ranking nameplate in the 2011 APEAL Study for a seventh consecutive year. Hyundai improves from 2010 more than any other nameplate this year, while Jeep and Chrysler also improve considerably.

The APEAL Study examines how gratifying a new vehicle is to own and drive, based on owner evaluations of more than 80 vehicle attributes. The 2011 APEAL Study is based on responses gathered between February and May 2011 from more than 73,000 purchasers and lessees of new 2011 model-year cars and trucks who were surveyed after the first 90 days of ownership. 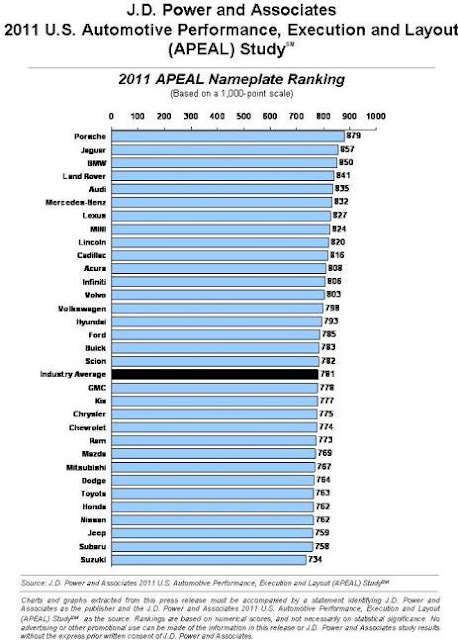