The 2013 Jetta Hybrid took me almost 160 miles on a quarter tank of gas or about 3 gallons which, projected out, is over 600 miles or better than 50 miles to the gallon on a single tank with a mix of street and highway driving. That's impressive, especially when the advertised combined mpg is 45. The Jetta hybrid braking may have been the only small difference but didn't take much getting used to. The Jetta hybrid is a greener alternative to the diesel version and also a way Volkswagen, with its lofty sales goals, can appeal to the hybrid crowd. On the diesel comparison, I had just started my week long test drive in the Jetta Hybrid when a father and son pulled up next to me their Passat TDI bragging about its 45 mpg and the fact it was manufactured in Chattanooga, Tennessee. Same manufacturer with another economical powerplant option so why argue. The trunk space was also more spacious than one would expect with two engines.

The 2013 Volkswagen Jetta Hybrid is powered by a peppy 1.4 liter turbocharged direct-injection TSI four-cylinder gasoline engine with a 27 horsepower eletric motor that produces and combined output of 170 horsepower. The 7 speed DSG dual-clutch automatic transmission was impressively smooth and can be operated as a pure automatic in “D” mode or shifted manually and there's an "S' sport mode as well.  The “ePower meter” includes the level of battery charge and the available amount of electric driving. 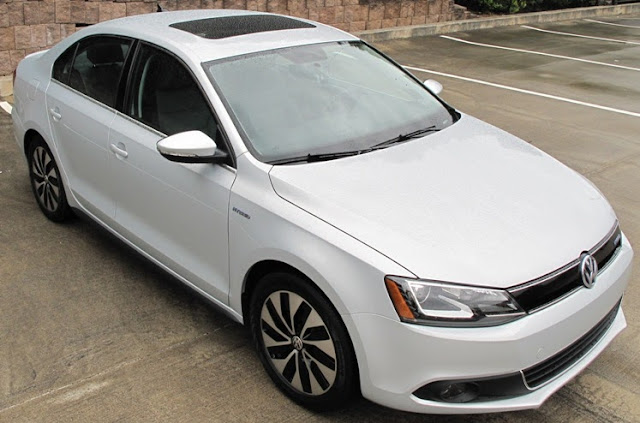 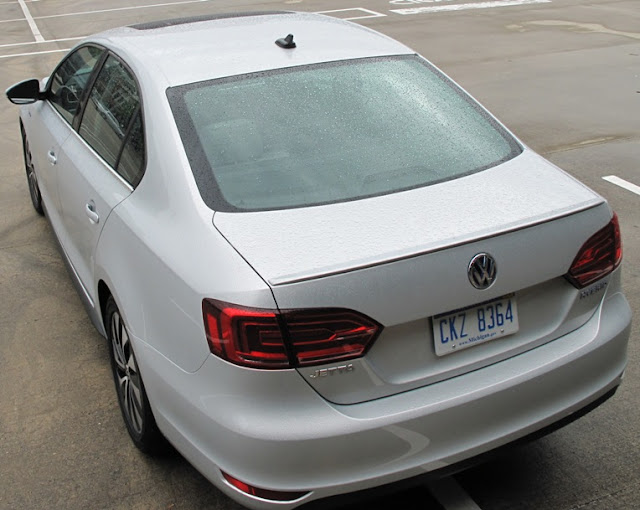 The driving experience is very similar to a conventional Jetta but the “E-Mode” which keeps the Jetta in electric mode until the battery is depleted certainly helped me achieve the impressive 50+ mpg.

Bottom Line: Jetta is the most popular VW model based on sales (39 percent of VW first half 2013 U.S. sales) so a hybrid version for exceptional fuel economy is a win-win for hybrid buyers seeking a conventional ride with environmental benefits.

Volkswagen provided the vehicle for evaluation purposes.
Posted by Rich Saxton at 4:43 PM