Volkswagen CrossBlue Coupé concept is 192.5 inches long, 79.3 inches wide and 66.1 inches high with a turbocharged direct-injection (TSI) V6 gasoline engine that works together with two electric motors to produce as much as 415 horsepower with a 0 to 60 mph time of just 5.8 seconds and a top speed of 147 mph. The CrossBlue Coupé can be driven as a zero emissions EV for up to 13 miles at a maximum speed of 75 mph. The CrossBlue Coupé has a manufacturer estimated combined fuel consumption of 70 MPGe. 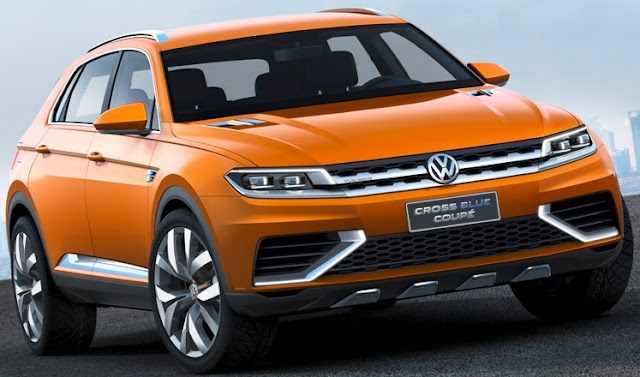 In hybrid mode, it allows for a theoretical range of around 570 miles. Powered by its lithium-ion battery, the CrossBlue Coupé can cover a distance of up to 13 miles in pure electric mode with a top speed is limited to 75 mph. In EV mode, only the 114-hp rear electric motor provides propulsion. In all-electric driving, the V6 TSI engine is decoupled from the drivetrain by opening the clutch, and the engine is shut off. As soon as there is a need for gasoline power, because of the battery charge or other parameters, it is coupled to the drivetrain again, jolt-free, within fractions of a second. The powertrain is made up of a 295-horsepower EA390-series V6 TSI engine mated to a six-speed DSG® dual-clutch automatic transmission. The vehicle’s electrical architecture includes a lithium-ion battery mounted in the center tunnel as well as a pair of electric motors: 54 horsepower at the front and 114 horsepower at the back.
Posted by Rich Saxton at 3:40 PM