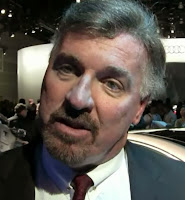 David Zuchowski (left), Hyundai Motor America executive vice president of sales will become President and CEO effective January 1, 2014 taking the place of John Krafcik (right) who will step down after five years at the helm upon the successful completion of his contract on December 31, 2013.

Zuchowski joined Hyundai Motor America in February 2007 as vice president of Sales with responsibility for all sales, sales operations, market representation, field operations and overall dealer relations. A 33-year veteran of the automotive industry, Zuchowski was previously with Mazda North America, where he served as vice president of Sales and Field Operations. Zuchowski began his career in 1980 at Ford, where he progressed through various executive-level positions including regional manager, product marketing manager, national merchandising manager and field operations manager for the Ford and Lincoln Mercury divisions.