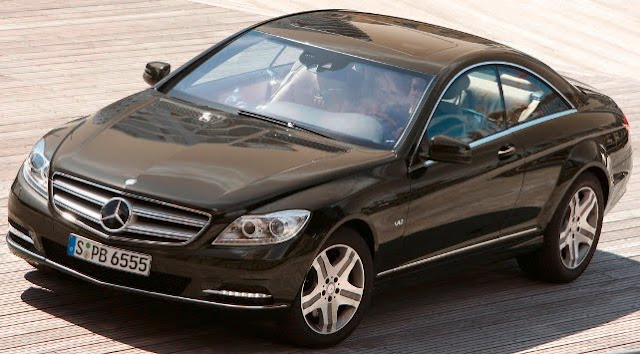 Driver assistance systems in the CL-Class include a modified Active Body Control with crosswind stabilization system that not only regulates roll, but pitching and squatting movements as well. Also, theres a Direct-Steer system which can vary the steering ratio based on the steering angle and Active Lane-Keeping Assist which evaluates information provided by a camera mounted on the inside of the windshield. It identifies the contrast between the road surface and the lane markings. In addition, the optional radar system scans the side of the roadway for dividers and other roadway edge markings. The system also evaluates the driver's actions and can reliably determine whether the car is departing from the lane intentionally or not. For instance, there is no warning if the driver accelerates hard just before passing or when accelerating onto a highway, or if he brakes hard or steers into a curve. The CL-Class Active Blind Spot Assist is a system that makes use of a multi-stage warning concept. If the system detects that a lane change would be too dangerous, it warns the driver by displaying a red triangle in the glass of the exterior mirror.

The standard Voice Control system allows the driver to operate the navigation, telephone and audio devices via whole-word input -- meaning the driver no longer needs to spell out his commands but simply speaks whole words when entering the destination, choosing a radio station or a music title from the Music Register, or when calling up a name from the phone book.