The 2013 Mercedes-Benz SL is almost 2 inches longer, 2.24 inches wider and 242 pounds lighter than its predecessor in an all-aluminum bodyshell with few components made from other materials. The designers used even lighter magnesium for the cover panel behind the fuel tank and roof. High-strength steel tubing is integrated into the A-pillars for added safety. The new V8 in the SL550 develops 429 horsepower from its displacement of 4663 cc, which is around 12 percent more than its predecessor despite some 0.8 liters less displacement. Fuel consumption has been reduced while at the same time the torque has increased from 391 lb-ft to 516 lb-ft, a gain of 32 percent. The SL550 takes just 4.5 seconds from 0 to 60 mph - eight tenths less than the previous SL550. 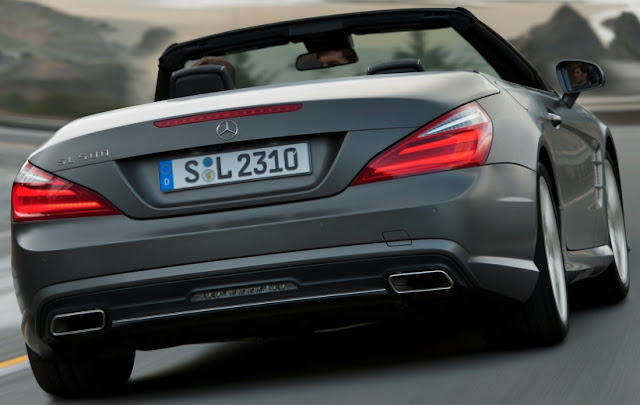 The sixth generation of the 60-year old SL model has a retractable hard top that can be operated using a space-saving electrohydraulic mechanism, converting the SL from coupe to roadster and back again in less than 20 seconds. In contrast to its predecessor, the new SL offers two versions of the retractable hard top - glass or the unique panoramic roof with MAGIC SKY CONTROL. The transparent roof switches between light and dark at the push of a button. In the light setting it is virtually transparent, offering an open-air experience even in cold weather. In its dark state the roof provides welcome shade and prevents the interior from heating up in bright sunlight. The frame of both versions is made from magnesium, reducing weight by around 13 pounds compared with the outgoing model, lowering the vehicle's center of gravity and delivering greater agility.

New Features
The FrontBass system which uses of the spaces in the aluminum structures forward of the footwell as resonating chambers for the woofers delivering clear, rich bass sounds even with the top down. The new layout has the added bonus of freeing up space in the doors and interior.

MAGIC VISION CONTROL is a new wipe/wash system which dispenses wash fluid just in front of the wiper blade via channels integrated into the blade - in both directions of travel. The result is no water splash on the windshield to disrupt driver visibility and a perfectly clean windshield. The water also stays on the windshield, with no risk of overspray into the passenger cabin when the roof is down. A fully heated wiper blade is included as standard equipment, preventing the build-up of snow and ice on the blade in winter. This heating function also allows warm water to be applied directly onto the windshield for the first time, even in cold temperatures.

The HANDS-FREE ACCESS system allows hands-free operation of the trunk lid by the driver simply moving their foot in the vicinity below the rear bumper.

The 2013 SL550 will make its global debut at the 2012 North American International Auto Show and goes on-sale in the U.S. this spring.
Posted by Rich Saxton at 5:14 PM