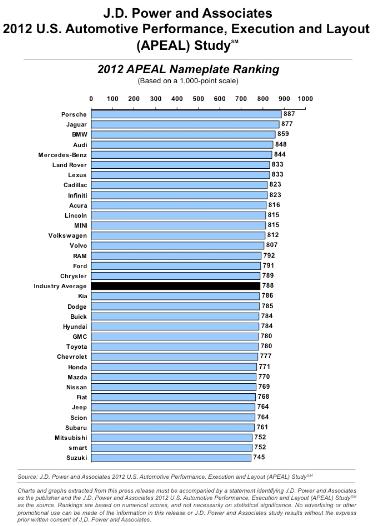 The J.D. Power and Associates 2012 U.S. Automotive Performance, Execution and Layout (APEAL) Study which examines how gratifying a new vehicle is to own and drive, based on owner evaluations of more than 80 vehicle attributes, has Porsche the highest-ranking nameplate for an eighth consecutive year. The study also finds that 27 percent of new-vehicle buyers who replaced a vehicle downsized, in other words, they purchased a new vehicle in a smaller segment than the vehicle they replaced while only 13 percent of buyers "upsized," and 60 percent purchased a new vehicle in the same size segment as their previous vehicle.

The downsizing trend also has an impact on owner satisfaction with the fuel economy of their new vehicle. While overall vehicle appeal continues to improve, increasing seven points year over year, the greatest improvement is in fuel economy. Forty-seven percent of owners say gas mileage was one of the most important factors in choosing their new vehicle, up from 40 percent in 2011.

Chevrolet receives the highest number of segment awards of all brands included in the study for the Avalanche, Sonic and Volt models. Seven brands each receive two model awards: Audi (for the A6 and A8); Dodge (Challenger and Charger); Ford (Expedition and Flex); Kia (Optima in a tie and Soul); MINI (Countryman and Coupe/Roadster); Nissan (Frontier and Quest); and Porsche (Cayenne and 911). The Audi A8 achieves the highest APEAL Study score of any model in the industry in 2012. Also receiving awards are the BMW 3 Series; Infiniti QX56, Range Rover Evoque; Mercedes-Benz SLK-Class; and Volkswagen Passat in a tie.