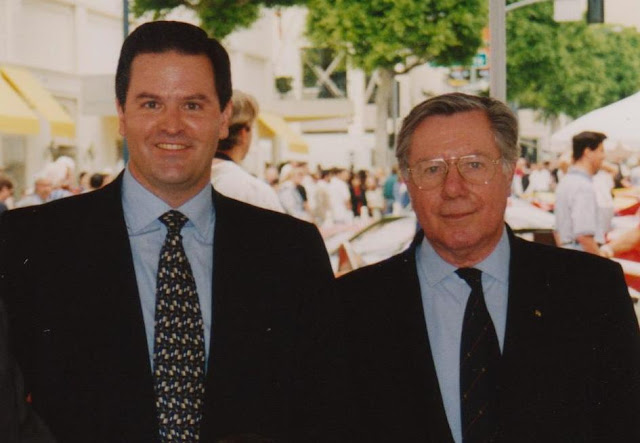 Sergio Pininfarina, the great Italian car designer who was almost synonymous with Ferrari died yesterday at age 85 in Turin, Italy.  Pininfarnia is pictured above with this reporter at the 1997 Beverly Hills Rodeo Drive Ferrari Concours d'Elegance where 175 Ferrraris of all vintages were on display.

Among his design credits are the Fiat 124 Sport Spider, Alfa Romeo Spider, Ferrari 250 and 500, Dino, Daytona, 356 and Modena. Pininfarina, the company, was founded in 1930 by his father, Battista "Pinin" Farina, who later changed the family name to Pininfarina, to design cars for Fiat, Alfa Romeo, Lancia, Cadillac, Rolls-Royce and Volvo. The fame was with Ferrari, designing nearly all of its models since the 1950's. Sergio Pininfarina was born Sept. 8, 1926, in Turin and joined the family business after earning a degree in mechanical engineering from Turin Polytechnic in 1950. He became general manager in 1960, managing director in 1961 and president in 1966, the year his father died. Yesterday we lost a car design legend.
Posted by Rich Saxton at 9:47 AM