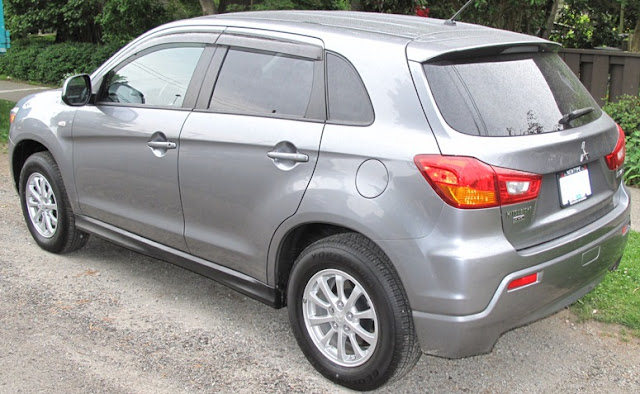 The 2013 Mitsubishi Outlander Sport 5-passenger compact crossover vehicle was named a small SUV 2013 "Top Safety Pick+" award winner by the Insurance Institute for Highway Safety. Outlander Sport sales in 2013 through the end of April are 7,547 so the IIHS recognition is a big positive for a brand that has been struggling with sales while celebrating 30 years of sales in the U.S. and 25 years of production in Normal, Illinois. The 2013 Mitsubishi Outlander Sport, known as the RVR in Canada (pictured above) has a 148 horsepower 4-cylinder engine that achieves an EPA-rated 31 mpg highway with starting MSRP of $19,170.

The only other small SUV receiving the designation is the 2014 Subaru Forester. To earn Top Safety Pick+ vehicles must receive good ratings in at least 4 of 5 tests and no less than acceptable in the fifth test.

Information from www.IIHS.org
Posted by Rich Saxton at 9:51 AM