The 2013 Volkswagen Beetle Convertible is fun, roomy and intuitive to operate - the same impression I had when I drove the VW Beetle in 1998 when it was reincarnated. 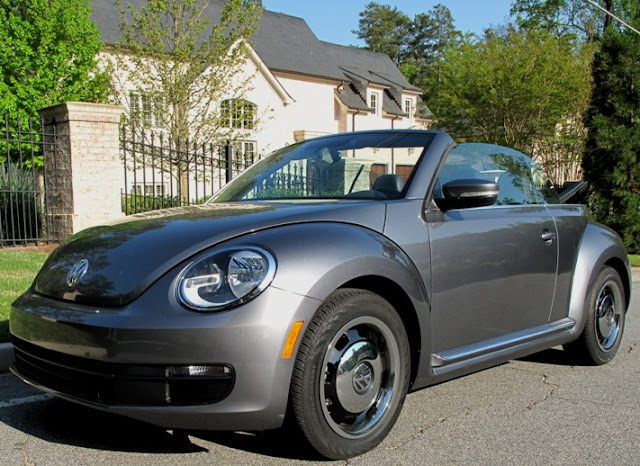 A classic key ignition (not a faub sensor tied to a push to start/stop button) and a quick 8 second roof drop time with a simple push of a button. My mission, driving through the ritzy affluent Chastain Park area of Atlanta, was to find the perfect spot to shoot some photos. Little did I know that the 13,000 square foot mansion I decided to use as a backdrop would also come with a full endorsement of the VW Beetle Convertible. I pulled in front of this magnificent home and then began to put the roof cover over the convertible top. 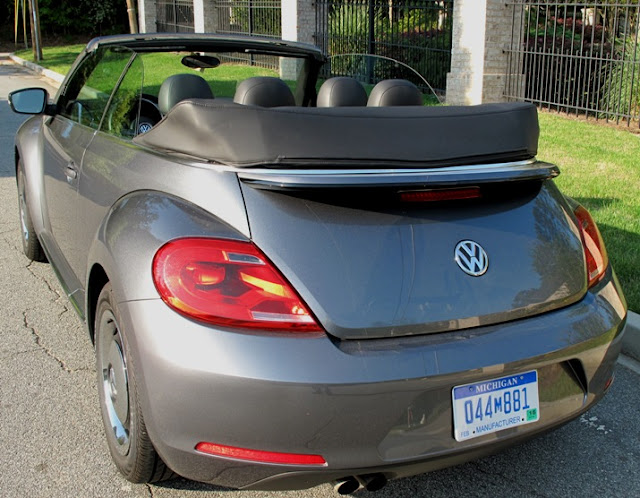 A lady walking her dog came out of the driveway of this monstosity and we struck up a conversation that led to her saying, "my Beetle Convertible is more practical than my SUV for going to Home Depot because with the roof down I can load plants and trees in the back seat." Turns out she's had her VW Beetle for two years and loves it. So I stumbled on a credible testimonial in a most unsuspecting neighborhood by pure accident. Her husband then came to check on our conversation and explained "the roof cover goes on much quicker and more easily (over the retracted roof) once you've done it a few times." Good advice from an executive who probably offered his wife a choice of any vehicle on the market and she chose the VW Beetle Convertible. 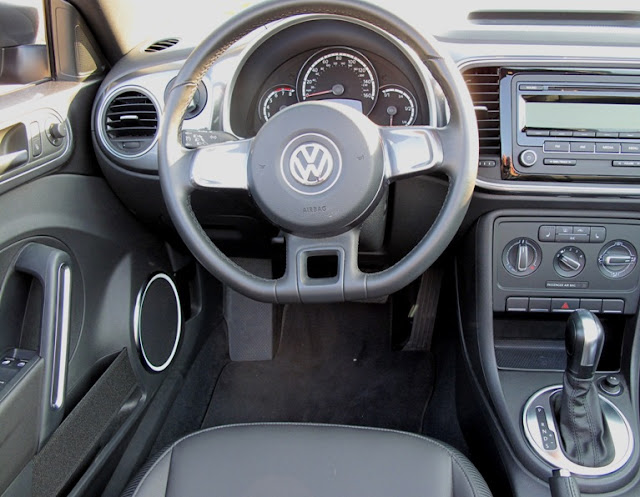 A great sound system and no telematics nightmare in this peppy, solid handling all purpose convertible that I used to commute from a community north of Atlanta to a movie set in downtown Atlanta daily for almost a week. The front seat easily slides forward to let rear passengers enter and exit with ease and sit in comfort. When you're in a certain vehicle, similar vehicles seem to jump out at you, and that was the case with this Beetle which seemed plentiful in Atlanta, including original vintage '70's model Beetles or "VW bugs" with drivers who acknowledged my taste for being behind the wheel in one. This test drive experience brought memories of my girlfriend, now wife, who drove a 1972 Beetle when we were dating - maybe that explains some of my affection for this iconic vehicle, which in it's contemporary rebirth has a lot to offer including practically and affordability.

Bottom line: The VW Beetle Convertible is versatile, practical, fuel efficient, affordable with solid handling and an easy-to-operate power retractable soft-top. Former VW Marketing Chief Tim Mahoney (now at GM) told me that more men are buying the Beetle despite a traditionally strong female buying history, now I know why - I felt great behind the wheel.
Posted by Rich Saxton at 2:14 PM