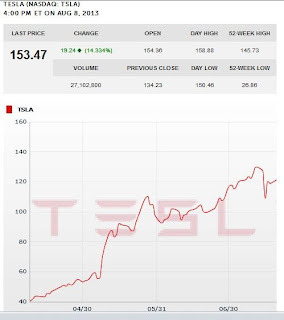 Second Quarter Earnings
Tesla reported, in a letter to shareholders, that its second quarter income was $26 million, an increase of 70 percent from last quarter's $15 million, on revenues of  $551 million, driven by record Model S deliveries and a significant improvement in automotive gross margin.

Stock Soars
Tesla's stock went public just over 3 years ago on June 29, 2010 at $17 a share, opened at $19, and, after a whipsaw session closed $23.89, a 40 percent first session gain on a day when the Dow fell 268 points to 9,870. Since then Tesla's stock has rallied to nine times its IPO price. Kick your rear bumper unless you loaded up on virtually any stock that day.

Sales Grow
Over 13,000 Model S customer vehicles are now on North American roads and have logged nearly 60 million miles, according to today's report. Tesla's production rate grew by 25 percent from 400 to almost 500 vehicles per week with 5,150 cars delivered during the quarter, significantly surpassing the company's expectation of 4,500 deliveries.


Global Expansion
Global Model S demand continues to grow, driven by Tesla's geographic expansion and enhancements to both the product and ownership experience. North American deliveries outside Tesla's home state of California grew at twice the rate of California deliveries this quarter. Deliveries into Europe began this week, with the first cars arriving in Norway, Switzerland and the Netherlands. In Norway alone, almost 800 vehicles are expected to be delivered this year based on current orders. Orders from Europe have grown every month since February. If demonstrated demand in North America and Europe is matched by similar demand in Asia, annualized sales for Model S could exceed 40,000 units per year by late 2014.
Recharging
Tesla's goal is to make recharging Model S as fast and as convenient as possible to enable worry-free long distance driving. Tesla is rolling out 120 kW Superchargers, which are 33 percent faster than the current version and can replenish half a charge in just 20 minutes, for free. 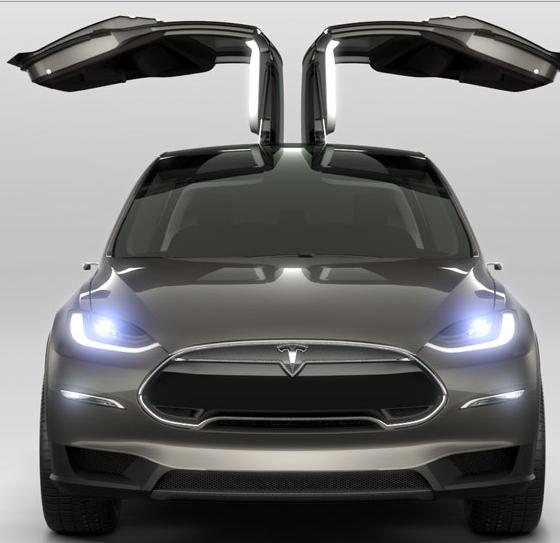 Coming Soon
The Tesla Model X, with  0 to 60 mph acceleration in less than 5 seconds and falcon wing doors for easy third row access, will go on sale in 2014 and be priced comparable to a similarly equipped Model S.
Posted by Rich Saxton at 2:09 PM