Identity Crisis
Is Volvo's identity crisis slowing down sales? Bought by Chinese Geely Automobile in 2010 with the volume leading S60 and XC60 both made in Ghent, Belgium, and their biggest sales market being the United States. Does that distance the company from its headquarters in Göteborg, Sweden, where safety slogans like "We built them the way we build them because we have to" originated.
Did Volvo lose its Swedish touch?
Sweden is one of the most successful producers of top talent for its tiny population of just 9.5 million people. Alfred Nobel, the inventor of dynamite, is the namesake of the world's most respected prizes, Ikea owner Ingvar Kamprad's furniture sales has made him one of the world's richest people, Henrik Stenson, born in Volvo's hometown, just won golf's top trophies, the FedEx Cup and Tour Championship, after fighting back from two major career slumps that maybe Volvo can follow. Will Volvo take a chapter from the late Stieg Larsson's highly successful Girl With The Dragon Tattoo trilogy and go for some aggressive market share revenge?
Bi-coastal Bouncing
When Ford bought Volvo in 1999, under then-CEO Jacques Nasser, it became part of The Premier Automotive Group and in 2001 moved U.S. headquarters from Rockleigh, New Jersey, where it had been since 1964 to Irvine, California. Alan Mulally became Ford's President and CEO in September 2006, Volvo's U.S. headquarters returned to New Jersey in 2008 and Volvo was the last PAG brand to be sold off. The moves and stretch of ownership uncertainty obviously froze focus.
Management Changes
Now is Volvo rearranging the deck chairs in the wake of sinking sales in the U.S., their largest market, or hoping to relaunch with a vengeance by giving the role of acting president and CEO to Tony Nicolosi, 26 years with Volvo, who will attempt to revitalize U.S. sales with his background at Volvo Cars Financial Services? He replaces one of the most competent automotive marketing men John Maloney, who was asked to consider a senior role in Europe but, with strong ties to Southern California, decided to leave after 14 years with the company. Greg Swetoha, Executive Vice President of sales operations, has also elected to leave Volvo, despite the August news that Volvo Cars of North America ranked first among luxury brands at having dealerships that are effective at influencing the purchase, according to Foresight Research's 2013 Dealership Report.
U.S. Sales Down
For the first nine months of 2013, Volvo's seven available U.S. models had sales of 48,193, down 6.6 percent from the same period last year. Only the XC60, with sales of 15,441, up 12.3 percent over 2012, and the volume leading S60 with 18,732, a 4.1 percent sales gain over last year, are showing increases. If U.S. sales hold steady for the last 3 months of 2013, they are on pace for sales of about 64,000 for the year, a far cry from the 2004 U.S. sales record of 140,000 vehicles. 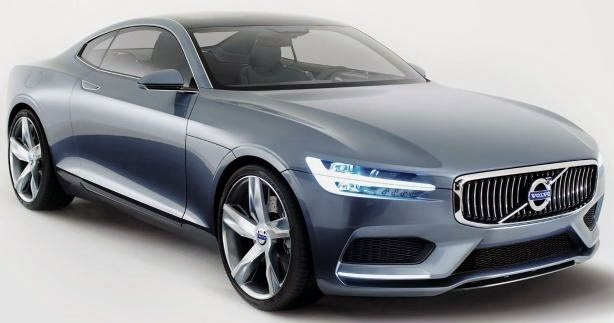 The latest Volvo Concept Coupé is being touted as a Scandinavian creation. The Swedish touch, safety legacy and revitalized products will be the key to the return of a brand that sold 456,224 vehicles globally just 9 years ago.
Posted by Rich Saxton at 2:30 PM