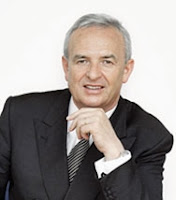 Professor Dr. Winterkorn has resigned as Volkswagen CEO after the Environmental Protection Agency (EPA) issued a Notice of Violation (NOV) to Volkswagen for “using a defeat device in cars to evade clean air standards" which "is illegal and a threat to public health”. Exposure to these nitrogen oxides (NOx) pollutants has been linked to a range of serious respiratory illnesses that can cause hospitalization or even premature death. Children, the elderly, and people with pre-existing respiratory disease are at higher health risk from these pollutants.

In a statement Winterkorn said, "I accept responsibility for the irregularities that have been found in diesel engines and have therefore requested the Supervisory Board to agree on terminating my function as CEO of the Volkswagen Group. I am doing this in the interests of the company even though I am not aware of any wrong doing on my part."

The NOV alleges that four-cylinder Volkswagen and Audi diesel cars from model years 2009-2015 included a sophisticated software algorithm that detects when the car is undergoing official emissions testing, and turns full emissions controls on only during the test. This results in cars that meet emissions standards in the laboratory or testing station, but during normal operation when they emit nitrogen oxides (NOx) that contribute to nitrogen dioxide, ground-level ozone, and fine particulate matter, at up to 40 times the standard.

The software produced by Volkswagen is a “defeat device,” as defined by the Clean Air Act. The software circumvents EPA emissions standards for certain air pollutants. California is separately issuing an In-Use Compliance letter to Volkswagen. The EPA and the California Air Resources Board (CARB) have both initiated investigations based on Volkswagen’s alleged actions.

The Clean Air Act requires vehicle manufacturers to certify to EPA that their products will meet applicable federal emission standards to control air pollution, and every vehicle sold in the U.S. must be covered by an EPA-issued certificate of conformity. Motor vehicles equipped with defeat devices, which reduce the effectiveness of the emission control system during normal driving conditions, cannot be certified. By making and selling vehicles with defeat devices that allowed for higher levels of air emissions than were certified to EPA, Volkswagen violated two important provisions of the Clean Air Act.

EPA and CARB uncovered the defeat device software after independent analysis by researchers at West Virginia University, working with the International Council on Clean Transportation, a non-governmental organization, raised questions about emissions levels, and the agencies began further investigations into the issue. In September, after EPA and CARB demanded an explanation for the identified emission problems, Volkswagen admitted that the cars contained defeat devices.

VW may be liable for large civil penalties and injunctive relief for the violations alleged in the NOV which could cost VW billions of dollars not only in fines but owners' class action lawsuits and lost business due to distrust.

Before announcing his resignation, Winterkorn pledged to "do everything necessary in order to reverse the damage this has caused."
Posted by Rich Saxton at 12:56 PM