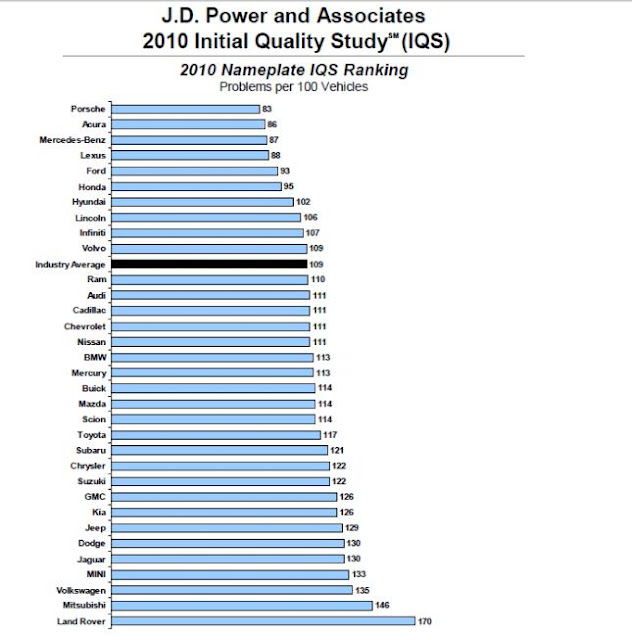 The 21 highest-ranked models in the 2010 Initial Quality Study:

There are 6 Toyota/Lexus/Scion, 4 General Motors, 3 Ford and 3 Honda/Acura vehicles.

This year, consumers were asked to report problems experienced in eight categories:
* Features/Controls/Displays
* Exterior
* Engine/Transmission
* Interior
* The Driving Experience
* Audio/Entertainment/Navigation
* HVAC (Climate controls)
* Seats
Over the years, the most frequent types of problems that owners report will vary. In the 2010 Initial Quality Study, for instance, the top five, most-frequently-reported problems are:
* Excessive wind noise
* Climate controls are difficult to use/see, or are in a poor location
* Hands-free communication system does not recognize user voice commands
* Front audio/entertainment system controls are difficult to use or are in a poor location
* Materials that scuff or soil easily

The 2010 Initial Quality Study is based on responses from more than 82,000 purchasers and lessees of new
2010 model-year cars, trucks and sport utility vehicles surveyed after 90 days of ownership. The study is based on a 228-question battery designed to provide manufacturers with information to identify problems, to drive product improvement, and to improve initial quality for new-vehicle buyers. The study was fielded between February and May 2010.