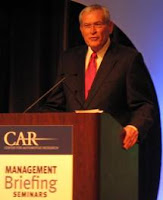 Ed Whitacre, a 68 year old Texan who spent 44 years at AT&T (previously SBC) serving as its Chairman for 18 years before retiring in April of 2007, took over as Chairman of General Motors in June 2009 after receiving a call from the Treasury Department. After initially telling them "no", he thought that having "always been a GM owner", he should reconsider. Whitacre told the audience at the Center for Automotive Research Management Briefing Seminars in Traverse City that "I took this job out of a sense of duty – the country put a lot of faith in GM and in the industry, and I wanted both to succeed."

Here are some of the highlights of his remarks which took us through the turnaround from bankruptcy to GM's first quarterly profit since 2007 in the first quarter of 2010 and today's renewed demand for its vehicles:

"First, we clarified the company’s focus. Today, GM has a clear and simple vision:  “Design, build, and sell the world’s best vehicles.”  That’s what we do… that’s all we do."
"Second, we reinvigorated the team and restructured the organization."
"In addition, we have brought new blood and fresh thinking into the management team … while retaining the auto expertise that is so important to our success.  It has also allowed us to open up opportunities for many of our younger talents – Mark Reuss running our North American team is a great example."
"Third, we’re moving faster and smarter. We’re changing the way we do business at GM – doing all we can to make smart decisions and make them fast… while clearing the underbrush that can impede good thinking."
"In June, for example, we launched a new subsidiary called GM Ventures to identify and develop new technologies."
"The fourth key to our ongoing turnaround – we’re making vehicles that people just can’t wait to buy.
Of course, as I’ve come to learn, it takes years to bring a new vehicle to market.  So we owe a debt of gratitude to the people who had the foresight to develop these awesome cars and trucks – people like Rick Wagoner, Fritz Henderson, Bob Lutz and others.  And I’m happy to report that the products we have in the pipeline are just as exciting as the ones we’re selling now.
So, that’s the foundation for GM’s turnaround."
"We want to reshape the company and help change the industry in the process.  And the opportunities for doing that are boundless… for all of us.  Let me give you three of my personal favorites:
First, is the industry’s growth potential.
In China, GM’s first half sales this year were up almost 50 percent compared to 2009.  That’s one reason we’ll roll out more than 10 new or upgraded products in China this year alone. GM is selling more vehicles today with four brands than we were last year with eight, which is very positive.
The second big industry opportunity we can all be excited about is technology. That’s why we’re so excited about the new Chevy Cruze Eco, which will get 40 mile-per-gallon on the highway.... We have aggressive plans to expand the number of hybrids and plug-in vehicles in our portfolio… and I know many of you are working on the same challenges at your companies.  The opportunities are huge… and we’re just beginning to see the possibilities.
The third opportunity is bringing innovation to how we market our products.
Last week, for example, Chevrolet became the first brand to pilot an app for the and iPad that allows salespeople to sell vehicles anywhere, anytime...."

"In fact, today, I’m pleased to announce that we concluded our dealer arbitration process, paving the way for the new GM dealer network. Starting November 1, we will have a network of about 4,500 U.S. dealerships in place to sell and service our Chevrolet, Buick, GMC, and Cadillac brands… and it will be the best network in the business. The GM dealer network will be the right size… and have the right dealers… to make our customers happy and keep them coming back.  Our network will be about 25 percent smaller than it was, but it will still be the nation’s largest.

In the mean time, we’ve embarked on what we believe is the largest facility makeover the industry has ever seen.  So far, we’ve updated more than 300 facilities; we expect to update more than 1,000 by the end of this year. For the first time in a while, our dealers are fully devoted again to what they do best…focusing on our customer.

So, GM has come a long way in a year’s time…and so has the industry.  In fact, I’d like to congratulate Chrysler and Ford for their progress during this period…as well as the suppliers, who toughed it out with all of us. Now, we’re on our feet again… getting into fighting shape… and taking the fight back to the marketplace."

In the Q and A that followed, Whitacre repeated that the government bailout loan has been paid back but they, the Government/taxpayers, still have a lot of equity/ownership in GM. He expects the upcoming IPO (Initial Public Offering) of stock to be the biggest in U.S. history. He doesn't like being called Government Motors saying "it turns off customers". He said "the timetable (for the IPO) is not there yet" with an S1 report still needed to be filed with the SEC.

Whitacre is optimistic that things are improving with dealers apparently screaming for vehicles and GM working hard to produce them. He says next week's second quarter earnings release will surprise people on the heels on GM's first quarter profit. Whitacre admitted that he now has his first Corvette and "no speeding ticket". He concluded by saying an all-new, redesigned Chevrolet Corvette will be coming soon.

Whitacre's rare speaking engagement seemed to impress the crowd. His delivery was simple and stated a straight forward mission and plan of execution, but keep mind this gathering depends on GM's success and survival, as do all us U.S. taxpayers.