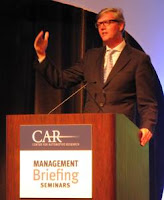 Saab Chairman Victor Muller, also CEO of Spyker cars of the Netherlands, speaking at the CAR Management Briefing Seminars in Traverse City last Thursday, calls his deal to buy Saab from General Motors the result of "a perfect storm" - GM went bankrupt and was reorganizing in early 2009 and put Saab up for sale when other OEMs were struggling and no other big players could justify a purchase - Muller paid $74 million, the price of a wind tunnel, for one billion euros worth of assets. Also, Saab will be partnering with GM through 2024, according to Muller.

Muller says the new 9-5 sedan arriving in showrooms this week will compete with the Audi A6, Mercedes-Benz E-Class and BMW 5 Series. Muller says the Saab 9-4X crossover which shares components with the Cadillac SRX will begin production in April of next year and an all-new Saab 9-3 is coming in 2012. Saab production levels have plummeted from 120,000 to 130,000 just three years ago. Muller is looking to looking to lower the break-even production level to 85,000 vehicles, starting off this year at 50 to 60,000 and hopefully reaching 100,000 next year.

Muller's math to profitability is that currently 1.5 million people own a Saab and 4.5 million at some point have driven a Saab so getting old customers back is the ticket. Those customers went to Audi, followed by BMW, Mercedes-Benz, and Volvo. Also ridding the perception that a Saab is a "glorified Opel". Another reason that sales slid was that an old model was coming off the line which may be able to bring a customer back twice but at 13 years since a redesign business drys up.

Muller is "looking for a bright future" and has plans for a 9-3 hybrid and EV (electric vehicle) and hopes for a revival of the 9-2, the premium A segment small car that gave Saab dominance in the 1950's and '60's.

In the fullness of time we'll know if Muller's love for the brand, "perfect storm" purchase and business model will bring back customers and make the Saab flourish again.
Posted by Rich Saxton at 12:40 PM