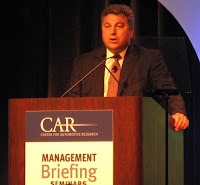 Steve St. Angelo, Toyota's chief quality officer for North America, claims that failing to get an acting role on the TV show Welcome Back, Kotter in 1970's forced him into the automotive industry. Fast forward to today when Toyota has been raked through the media and Washington Congressional hearings over floormat/pedal interference, unintended acceleration and sticky gas pedals and St. Angelo delivers a passionately emotional speech to an automotive audience saying that after rigorous internal and third party testing "there is nothing wrong with the electronics" and that's with 40 million Toyotas on the road today. Using Exponent, a company with scientists and engineers, to test every electronic throttle control system, past and present, St. Angelo says they "can't find anything" that would have caused the reported incidents that have dominated news headlines for nearly a year. Since March, in an effort to "go to the problem and see it for yourself" St. Angelo has been traveling to Japan every other week to Toyota's proving grounds where vehicles are put through magnetic fields to check for potentially damaging effects.

Nevertheless, St. Angelo reiterates that Toyota never comprises safety in its vehicles and needs to listen to its customers to make improvements to quality. St. Angelo says Toyota is doing more testing in the development stage before mass production begins, has 1,000 more engineers dedicated to quality assurance, six more offices related to quality and "smart" expert response teams who evaluate quality and go into the field to inspect vehicles. He says brake override will be standard by the end of the year. He points out that the industry will have 20 million vehicles recalled this year, the most since 2004.

Despite the recalls and economic recession, Toyota made no layoffs worldwide, including among its 35,000 employees in North America. Toyota has a $23 billion investment in 14 U.S. plants including Mississippi that will produce Corollas, bringing production of that popular car back to the U.S. St. Angelo says that 200,000 Americans have jobs because of Toyota. He recommends reading One Team, All Levels, an employee-written book on the Toyota culture.

The message is that Toyota is doing all it can do about quality and is being transparent with the results. Government findings and expert panels all seem to conclude that driver error is the culprit and manufacturers are making fixes to compensate for them plus adding many new safety systems. At the CAR Management Briefing Seminars in Traverse City, Ford, for example, said it's reducing its supplier base from 3,000 to 750. With that many suppliers and thousands of vehicle parts it's truly amazing that more doesn't go wrong. The bottom line is that these are complex vehicles with drivers who need to be better educated and tested to operate them.
Posted by Rich Saxton at 12:40 PM