Bijan Pakzad died of a stroke at age 67 in April of this year but the fashion icon's legacy for expensive fine automobiles to lure customers into his posh Bijan store on Rodeo Drive in Beverly Hills lives on. Bijan's collaboration with Rolls-Royce started 11 months ago before his untimely death and at that November 2010 announcement, Bijan said that 30 globally powerful customers will be receiving a Rolls-Royce with varying Bijan-influenced design and color fashion statements. 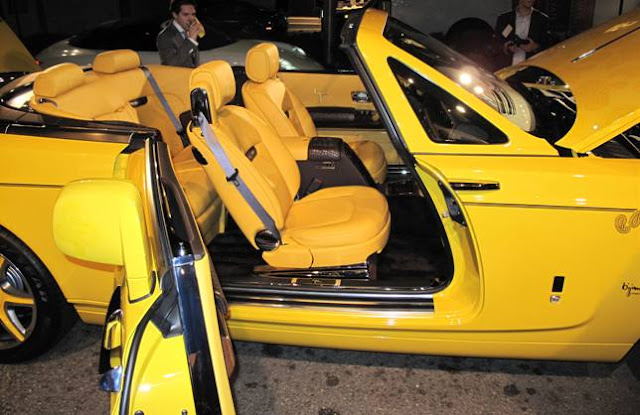 Last Thursday night's gala at Bijan's famed location that ignited Rodeo Drive's high fashion fame in 1976, was as much a tribute to the man as it was celebration of the unveiling of the first Limited Bijan Edition Rolls-Royce Phantom Drophead Coupe for a customer with the initials MMB. According to Rolls-Royce North America President David Archibald, there are 31 elements in this all-yellow edition that were requested by Bijan as part of the British automakers "Bespoke" program to  personalize these fine cars. A typical Rolls-Royce Phantom starts at $450,000 so one would expect this line of customized ones to cost much more. Archibald said that this is the second one to be delivered to Bijan, with another in production and two others on order. 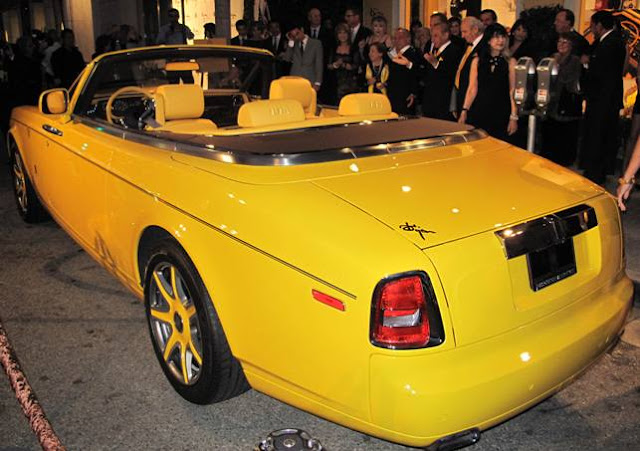 Rolls-Royce sold over 2,700 cars in 2010 through its 85 dealers globally and sold more than 800 in the U.S. last year from its 32 dealerships. Though not disclosed, those numbers are expected to be exceeded in 2011. Rolls-Royce has two vehicle lines, the Phantom and the Ghost, that each have variations such as a long wheelbase version or as is the case with this Phantom, a 2-door coupe. Like all Rolls-Royces, this Bijan edition was built at the Goodwood factory in England and is powered by a 453 horsepower 6.75 liter V12 engine developed at BMW's Munich engine plant.

The festivities around this introduction, like the car itself, were first class with gorgeous models serving food delicacies and champagne. Put Bijan on Rodeo Drive on your "must see" list when in Beverly Hills.
Posted by Rich Saxton at 12:42 AM