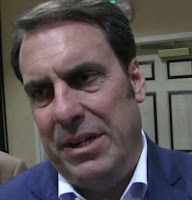 Mark Reuss, President of General Motors North America, is spending a few days in the Los Angeles area discussing how GM’s post-bankruptcy mindset has changed and how the company will revitalize their California dealers to improve the customer experience. Reuss spoke to a group journalists at a breakfast meeting and covered everything from marketing to products. He began by bragging about his recent 170 mile per hour experience behind the wheel of a Camaro LZ1 at Germany’s famed Nurburgring racetrack where the car recorded a sub-eight minute lap.
The new Chevrolet Camaro LZ1 and sub-compact Spark will be shown at the Los Angeles Auto Show in mid-November. Reuss says that Chevy is becoming the brand that has everything and is the only top 5 global brand to have seen growth this year, with much of that due to sales of the Cruze over the past five months. For the balance of 2011, Reuss said watch for the Cruze ECO delivering 42 mpg, the 40 mpg Sonic which just starting selling last month and the Malibu ECO coming in December. In addition to the Spark mini-car hitting dealers in 2012, there will be all-new Impala giving Chevy an entry in all five car segments. He also hinted that an all-new Corvette is coming and to stayed tuned for new truck announcements.
On the demographic front, Reuss says the Millennials, the under 30 age group, will make up 40 percent of the car market next year and to help capture that buyer is working with a buddy of his at MTV to understand that crowd.
Reuss mentioned that Buick has the Verano coming and Cadillac the XTS and ATS. He expects the Cadillac ELR, which was the Converj concept car, to have the same showroom draw as the Volt does for Chevy, saying that most people can’t afford the Volt so buy a Cruze. He says Cadillac will soon announce CUE, the Cadillac User Experience infotainment electronics package.
Getting to the real mission at General Motors, Reuss admits there are still big brand and customer care deficits to overcome. He has spent the past two weeks working on customer services and quality is a daily event that everyone is working on. The mindset of “how do we save money is no more”, says Reuss, they are aimed at being a “revenue generating customer-centric company”. The “Mr. Goodwrench” name is gone and won’t return says Reuss, it’s now Certified Service and “we’re going to treat people right.”
There is a big push at General Motors to revitalize the West Coast dealer facilities, then it’ll be on to the “next coast”. Reuss believes that they have the “right products to begin to take back market share. California dreaming is becoming a reality.” In the next two days, he is making the rounds to dealers, media outlets and even the Los Angeles Chamber of Commerce to spread the GM word.
On powertrains, Reuss says the E-assist improves fuel economy by 25 percent and with regards to GM bringing diesel to the U.S., he says the “turbo-diesel Cruze is the best version” and they're working on bringing it here.
GM's RelayRides project announced today will be a car sharing service using private vehicles to be launched in California, but Reuss was not sure how all the logistics will work.
Today's breakfast speech by Reuss was a very informative, frank and honest insight into General Motors, a company that us taxpayers have an equity interest in seeing succeed.
On a personal note, Reuss told me privately that his 76 year old father, Lloyd, a former General Motors president, who I interviewed 20 years ago, had a bad spill last January so we wish him a speedy and full recovery.
Posted by Rich Saxton at 3:46 PM