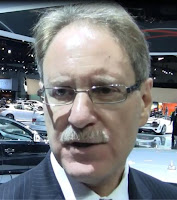 De Nysschen just left his role as President of Audi of America which he held for the past seven years. During his 19 years at Audi he also served in executive positions in South Africa and Japan. Prior to joining Audi, de Nysschen worked for BMW in South Africa. He holds a bachelor's degree from the Nelson Mandela Metropolitan University, Port Elizabeth, South Africa, and an MBA from the University of Pretoria, South Africa.

He moves from a U.S. position at Audi where sales records are being set monthly to a global responsibility at Infiniti, a luxury brand that is just launching a worldwide footprint. Geographically, he moves from the Washington, D.C. area to Hong Kong, the former British colony and English-speaking gateway to China and an area where one might expect a factory to be built at some point. Best of luck to Johan in his new challenge.
Posted by Rich Saxton at 3:19 PM