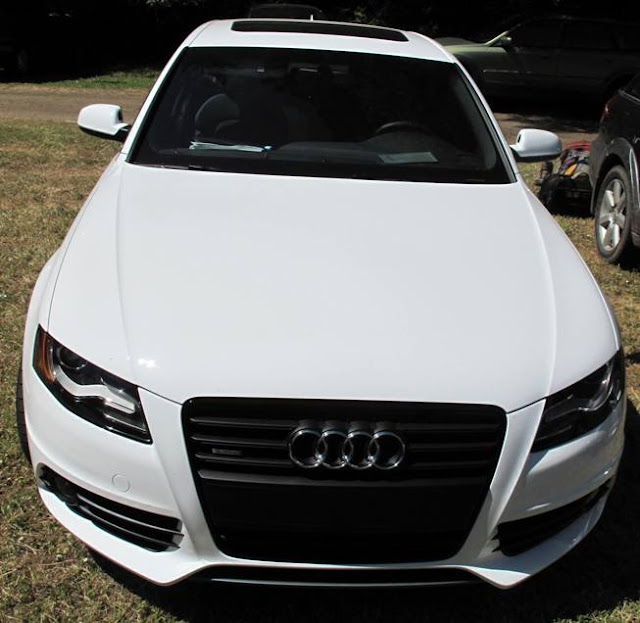 The Prestige package features Audi adaptive xenon headlights which pivot up to 15 degrees to allow you to see ahead in the dark by lighting up corners, LED daytime running lights, Audi side assist which helps monitor blind spots and fast-approaching vehicles at a range of 150 ft. at speeds over 19 MPH. MMI® Navigation plus features a 7" full-color LCD screen and MMI control logic equipped with the latest generation of MMI, powered by a 40-GB hard drive and an NVIDIA® processor. 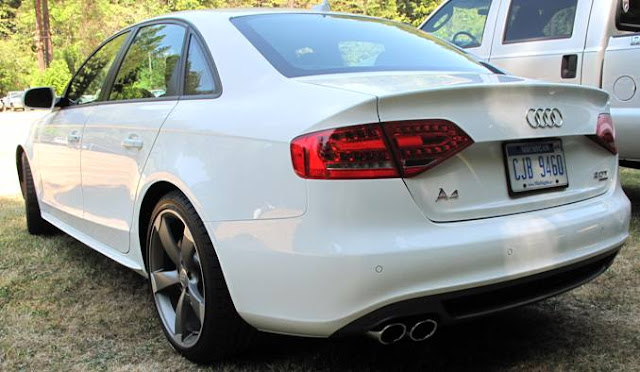 When I first saw the A4 parked in the lot - "wow"! I jumped into the comfortable, snug sport driver's seat in Oakland, California and quickly found the key node simple to use for unlocking the doors and opening the trunk. There are two start options, a push button or pushing the node deeper into its slot on the dash. All the controls were ergonomically well-placed so I just had to align the mirrors, press the clutch, press start and was underway. First stop, Ikea where I effortlessly folded down the back seats to make room for the cargo. A performance sedan that can transport long, large and odd-sized objects - great second impression of the A4. 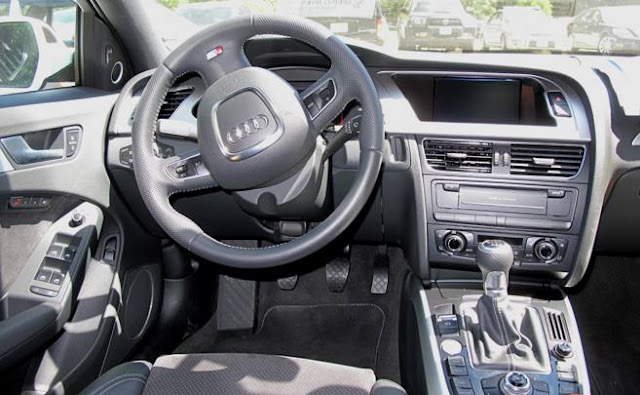 It took a while to figure out the sequence and methodology of the driver wheel-mounted controls for the radio which required a combination of using the mode button and rolling scroll control to cycle through the functions to pick a source and then station, but once understood, it was very intuitive and easy to operate without distraction. The sound from the 14 speaker, 505 digitally amplified watt Bang & Olufsen® Sound System was truly incredible. Apparently, microphone-based noise compensation ensures optimum sound under varying road conditions and speeds - I'll take Audi's word on that.

The climate controls were efficient, using the same knob for both fan speed and temperature. The rear back-up camera and monitor, an option on many vehicles today, was very helpful. The 211 horsepower turbo-charged 2.0 liter inline 4 cylinder engine provided plenty of power making the six speed manual transmission a fun-to-drive experience.

After dropping off the Ikea items in Berkeley in exchange for a passenger, it was time to hit the freeway north over the Richmond Bridge. My passenger quickly noticed that the silver decorative panel in front of him reflected light in his face so had to cover it with a book to cut the glare. Prone to car sickness, my passenger seemed to handle the smooth shifting manual transmission and road-hugging attributes of quattro on the challenging windy roads through the redwoods along the Russian River and the return trip on the scenic back-road route to Berkeley. The Audi A4 passenger comfort even induced a snooze.

Time to assemble the Ikea dresser in an apartment two floors above the parking garage. With the key node in my pocket, I assembled the dresser, then took the trash to the parking garage to find the Audi trunk open. Apparently, the "open trunk button" on the node must have depressed during my Ikea efforts. Luckily, nothing was stolen but could have been. This could happen to any vehicle with keyless entry devices where proximity permits vehicle access. So be sure to leave your keyless entry key nodes in a place where this can't happen.

The Audi A4 Prestige S Line MT6 Sedan oozed with high performance prestige, provided cargo versatility, demonstrated sporty handling with peppy power and cozy comforts combining to definitely show off, inside and out, as an all-round classy vehicle. The Audi A4 deserves all the accolades.
Posted by Rich Saxton at 1:10 PM