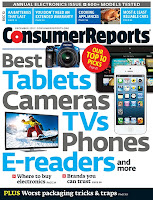 The Consumer Reports 2012 Annual Auto Reliability Survey is out and Toyota's three brands, Scion, Toyota, and Lexus, swept the top spots among the 28 car brands ranked. Of the 27 models in the brand’s lineup, 16 earned the highest rating. The subcompact Toyota Prius C earned Consumer Reports’ top score overall. The hatchback Prius, the larger Prius V, and the new Prius plug-in were also above average.

Four other Japanese makes followed in this order: Mazda, Subaru, Honda, Acura. All of the models produced by the top seven brands had average or better reliability. And of the 90 Japanese models reflected in Consumer Reports’ brand comparison, 86 were average or better, with 35 earning the highest rating. Mazda was buoyed by the predicted-reliability score for the new 2013 CX-5 SUV, which is much better than average. And Subaru’s standing improved, with its redesigned Impreza debuting with top marks and none of its models scoring below average. Honda dropped one spot in the ranking, to sixth place, but its worst vehicle, the Odyssey minivan, improved from below average to average.

Audi ranked 8th for its best showing ever, moving up 18 spots, making it easily the most reliable European make and the top non-Japanese brand.

Next is Infiniti and Kia rounds out the top 10, followed by Cadillac, GMC, Nissan, Mercedes-Benz and Chevrolet at 15th. BMW, Hyundai, Volkswagen, Jeep and Volvo round out the top 20.

Buick is 21st with Mini, Chrysler, Dodge and Ram next. The bottom three are Lincoln, Ford and Jaguar. That's right, Ford dropped to next to last while its luxury brand, Lincoln, placed just a notch higher. Only two years ago, Ford was Detroit’s poster child for reliability.

"Sixty percent of Ford-branded models and half of Lincolns were below average in predicted reliability, and none placed above average,” said Jake Fisher, director of automotive testing for Consumer Reports. Several factors contributed to Ford’s decline in Consumer Reports’ reliability rankings. A few new or redesigned models, including the Explorer, Fiesta, and Focus, came out of the gate with more problems than normal. Ford has also added the MyFord/MyLincoln Touch electronic infotainment system, which has been problematic so far, to many vehicles. In addition, three historically reliable models—the Ford Escape, Fusion and the Lincoln MKZ—are not included in the analysis; the three were redesigned for 2013 and CR doesn’t yet have reliability data on them.

For more details subscribe to Consumer Reports and/or pick up the issue.
Posted by Rich Saxton at 2:09 PM