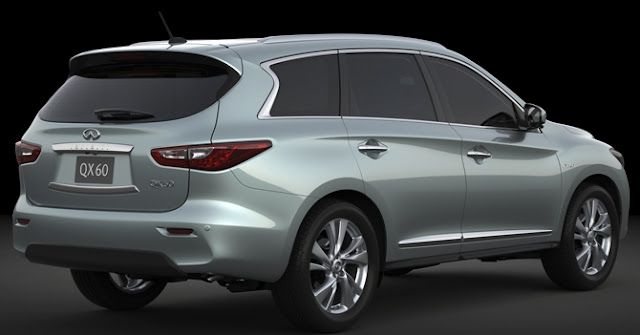 The 2014 Infiniti QX60 gasoline electric hybrid model powered by a 2.5-liter supercharged engine and 15 kW electric motor with an estimated 250 horsepower will hit showrooms this summer joining the Q70 Hybrid (currently available as the M Hybrid) and previously announced Q50 Hybrid from Infiniti. The new Infiniti QX60 was launched in early 2012 as the Infiniti JX35 and the hybrid is projected to be priced about $3,000 above the non-hybrid models. The QX60 Hybrid's Infiniti Direct Response Hybrid® system uses a compact Lithium-ion battery and electric motor to provide supplementary power through its one-motor/two-clutch system. The new Infiniti QX60 Hybrid is projected to get 26 miles per gallon.
Posted by Rich Saxton at 12:31 AM