Vehicle Dependability Continues To Improve According to J.D. Power

Twenty-five of 36 vehicle brands have improved in long-term dependability in 2010, compared with their performance in 2009 according to the J.D. Power and Associates 2010 U.S. Vehicle Dependability Study.

Porsche leads the overall nameplate rankings in 2010, which is consistent with its performance in the J.D. Power and Associates 2007 Initial Quality Study which measures new-vehicle quality at 90 days of ownership. Lincoln improves by six rank positions from 2009 to follow Porsche in the nameplate rankings. Rounding out the top five nameplates are Buick, Lexus and Mercury. In addition, seven of the 10 models with the lowest incidence of problems in the industry are from Ford and General Motors, including the 2007 model-year Buick Lacrosse, Buick Lucerne, Cadillac DTS, Ford Five Hundred, Lincoln MKZ, Mercury Milan, and Mercury Montego.

The Cadillac DTS has the fewest problems in the industry, with just 76 problems per 100 vehicles. This marks the first time in more than a decade that a model from a domestic automaker has achieved the lowest PP100 score in the Vehicle Dependability Study. 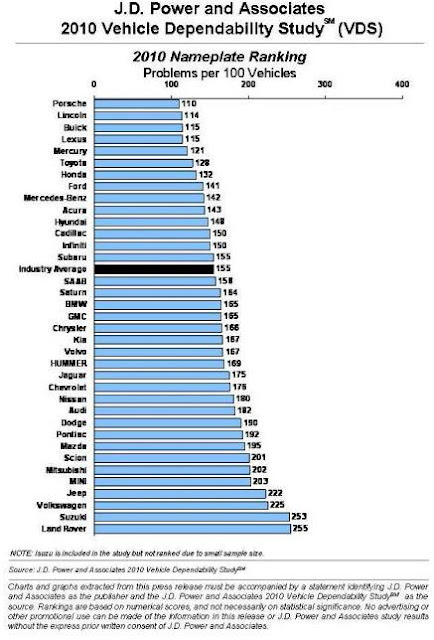 The study measures problems experienced by original owners of three-year-old (2007 model year) vehicles and includes 198 different problem symptoms across all areas of the vehicle. Overall dependability is determined by the level of problems experienced per 100 vehicles (PP100), with a lower score reflecting higher quality. The 2010 Vehicle Dependability Study is based on responses from more than 52,000 original owners of 2007 model-year vehicles. The study was fielded between October and December 2009.