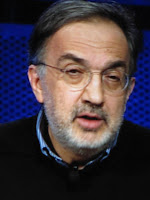 Sergio Marchionne, CEO of Chrysler, was the opening keynote speaker at the 2012 NADA Convention in Las Vegas, where, he says despite his world travels, it's a first time visit to Vegas but having watched so many movies made here, he said he felt like he's been here before. He gave a content-filled speech that touched on many issues, both industry and Chrysler-specific. He is optimistic about sales continuing to grow and pointed out that the average car on the road is 10.8 years old, the oldest since Polk began keeping the data in 1995 when the average vehicle age was 8.4 years. He cautioned the uncertainty surrounding Europe's financial health could spread beyond its borders. He said overcapacity is not a problem and product sales should drive profitability, not the financing business. Marchionne said Chrysler is adding 1800 employees in Illinois to build the new Dodge Dart based on the Alfa Romeo, which, as a brand will be built and back on sale in the U.S. as early as next year. Chrysler will also be adding jobs in Detroit to build the Maserati Kubang SUV.

Marchionne stressed that their bankruptcy and subsequent "restructuring set the rebirth of the industry" and "sense was restored to the marketplace". He emphasized that they have to "maintain the discipline that restructure enforced". He punctuated that "customer satisfaction is a crucial differentiator" in the industry. He said that the internet has "taken pricing out of the dealers' hands." He said that "dealers are more profitable than they have been in a decade". Customer satisfaction scores have plateaued so Chrysler is revising their program that is  based on them.

The 2025 54.5 miles per gallon fuel economy target presents a challenge that Marchionne says will force getting more power out of smaller engines. They are working on an electric Fiat 500 for later this year. He said electric vehicles will only play a marginal role and highlighted natural gas as a viable option and made clear that there will be a multiple array of solutions for 2025 and they have a sustainability team working on it. In a speech filled with numerous quotes from significant men in history, Marchionne came across as humbled and thankful for the government bailouts that saved Chrysler yet confident that Chrysler and its ties to Fiat and Alpha Romeo will be good for Chrysler, the industry and America.
Posted by Rich Saxton at 10:24 PM