The Fisker Karma, with its 22 inch wheels, is the same in its production version as it was in concept, as was the intention of Henrik Fisker, the designer and founder of Fisker Automotive according to Billy Tally, Fisker's Director of Vehicle Integration who spoke to the Motor Press Guild. One of the 500 engineers working in Fisker's Irvine headquarters, Kurt Fredlund, says one of the most amazing feats in getting this based-priced $102,000 luxury hybrid into production was the just 2-plus years from the concept stage which makes some of lyrics from the John Lennon song very appropriate, "Instant Karma's gonna get you" as the performance and handling are stunning based on my 5 mile test drive. 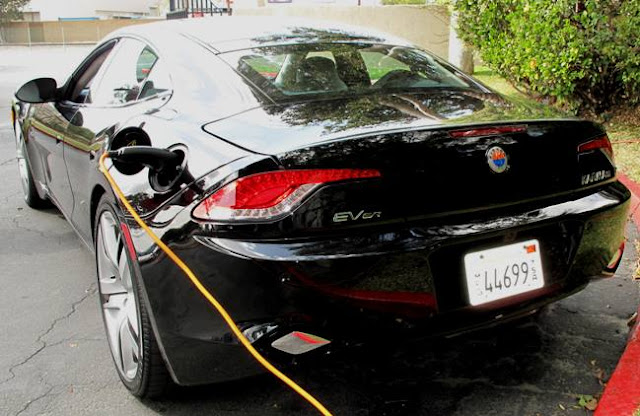 Very nimble given its size and weight yet very solid on the road with its conventional double wishbone suspension. There are two modes: Stealth for electric only with a 50 mile range before the gas engine kicks in with about 15% of battery charge left and Sport which is the hybrid, gas-electric combo, delivering a 300 mile range using a General Motors 265 horsepower Ecotec engine fed by a 10 gallon tank of gas and fully charged 605 lb. battery pack that Tally says "can go for at least 10 years".

The combined powerplant is rated at 403 horsepower with an amazing 950 foot pounds of torque with no clutch or transmission. There was some discussion about its EPA MPG rating which settled on 32 miles per gallon though Tally claimed it can be as high as around 50 mpg. If you're looking for a moonroof to soak in the rays forget it, there's a solar roof to absorb sunlight for charging the batteries and running the fans to keep the car cool. The car is low to the ground which gave my six foot body some difficulty climbing in and out. 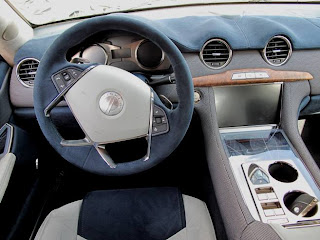 My fellow MPG member Zoran Segina of LA Car was behind the wheel and drove the Karma hard, which according to engineer Fredlund, doesn't affect the range much because the hard breaking regenerates battery power. The top priced Karma is $116,000 with eco-friendly sheet metal and a back-up camera system. Music plays out of external speakers at speeds under 25 miles an hour to alert pedestrians that Karma is nearby, though the noise of LAX at our test drive location made it difficult to hear the Karma's warning music.

Sticking with John Lennon, his "Watching the Wheels" song seems to fit Executive Chairman Henrik Fisker who has just turned over his CEO reigns to Tom LaSorda, the 35 year automotive industry veteran who started with GM and joined Chrysler in 2000 becoming CEO in 2006 then co-Vice Chairman in 2007. "I'm just sitting here watching the wheels go round and round, I really love to watch them roll, No longer riding on the merry-go-round, I just had to let it go." Deservedly so Henrik but back to Karma - "But we all shine on, Like the moon and the stars and the sun" - right on! Now awaiting the next more affordable model, which based on Karma's speedy evolution, could be very soon.