Which 2010 model cars are the most dependable according to their owners after three years of ownership? The Lexus RX, with the fewest reported problems in the industry at just 57 PP100, led Toyota which captured seven model categories that also included the Lexus ES 350, Scion xB, Scion xD, Toyota Prius, Toyota Sienna and Toyota RAV4. This is the first time in the history of the study that a crossover or SUV has topped the list.

General Motors came through with four segment awards for the Buick Lucerne, Chevrolet Camaro, Chevrolet Tahoe and GMC Sierra HD. Honda had two model-level awards for the Acura RDX and Honda Crosstour. The Audi A6, Ford Ranger, Hyundai Sonata, Mazda MX-5 Miata, and Nissan Z also receive segment awards. This could be valuable information if you're looking to buy a used car, maybe one that's coming off a three year lease. Obviously mileage and vehicle condition are other factors to consider. 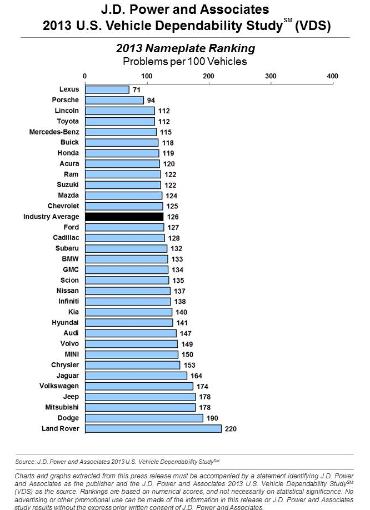 Lexus ranks highest in vehicle dependability among all nameplates for a second consecutive year. Rounding out the five highest-ranked nameplates are Porsche, Lincoln, Toyota and Mercedes-Benz (see above). Chrysler's Ram brand posts the greatest year-over-year improvement from 2012 by 52 PP100. In 2013, overall vehicle dependability averages 126 PP100, a five percent improvement from the 2012 average of 132 PP100 making it the lowest problem count since the inception of the study in 1989.

The 2013 Vehicle Dependability Study is based on responses from more than 37,000 original owners of 2010 model-year vehicles after three years of ownership. The study was fielded between October and December 2012.
Source: J.D. Power & Associates
Posted by Rich Saxton at 8:36 AM