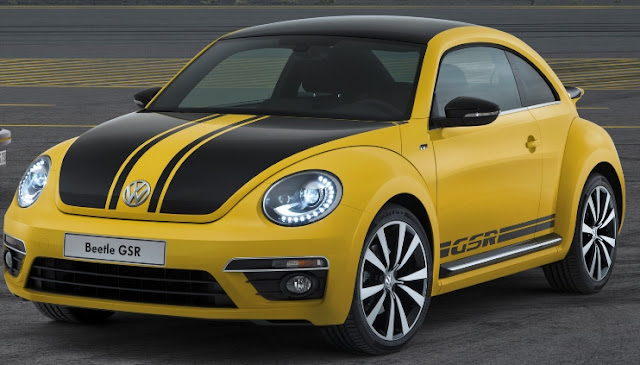 The 2014 Beetle GSR (Gelb Schwarzer Renner or “Yellow Black Racer”) in yellow and black, like its 1970s predecessor, the GSR debuts a 210 horsepower 2.0-liter turbocharged inline four-cylinder TSI® engine that will be fitted to the Jetta GLI and Beetle Turbo during the 2013 model year. Just like its predecessor, only 3500 GSR models will be made and more than half of those will be sold in the U.S. The GSR is based on the Beetle Turbo with Sunroof and Sound model so it comes equipped with the Fender® Premium Audio System; a panoramic sunroof; Keyless access with push-button start; Bi-Xenon headlights with LED DRLs; LED license-plate lighting; heatable front seats; Bluetooth® connectivity; a Media Device Interface (MDI) with iPod® cable; three-color ambient lighting; aluminum-alloy pedals; and three auxiliary instruments that include a clock with a stopwatch function and a boost gauge. The Volkswagen Beetle GSR will go on sale in the fall as a 2014 model; pricing will be announced closer to launch.

The Beetle R-Line, with the Beetle Turbo’s sport-tuned suspension, will be added to the Volkswagen line-up for model year 2014 with performance-inspired exterior and interior treatments like 19-inch aluminum-alloy wheels on lower-profile all-season tires. 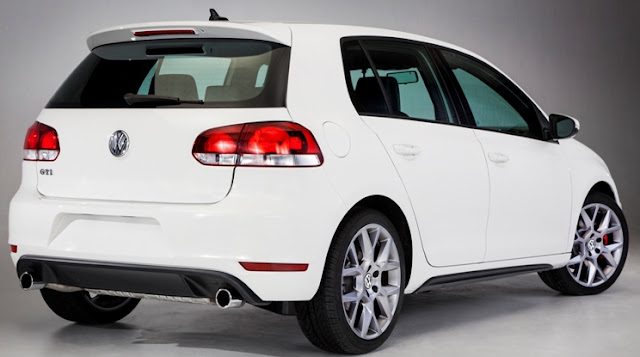 The GTI Wolfsburg Edition and GTI Driver’s Edition will be offered in limited quantities for the final model year of the sixth-generation hot-hatch. The first to go on sale is the GTI Wolfsburg Edition, which will be in dealerships during the first quarter starting at $25,095 for a six-speed manual transmission version or $26,195 when equipped with a six-speed DSG® dual-clutch automatic transmission. There will be a total of 2000 Wolfsburg Edition models. The GTI Driver’s Edition arrives early in the second quarter of 2013 is the GTI Driver’s Edition with the GTI Sunroof and Navigation package and adds the 18-inch aluminum-alloy Laguna wheels, a golf ball shifter knob, red-stitched carpeted floormats, and partial leather seat coverings. Just 3000 units will be sold in the U.S., priced from $29,695 with the manual transmission and from $30,795 for the version with the six-speed DSG transmission.
Posted by Rich Saxton at 10:03 AM