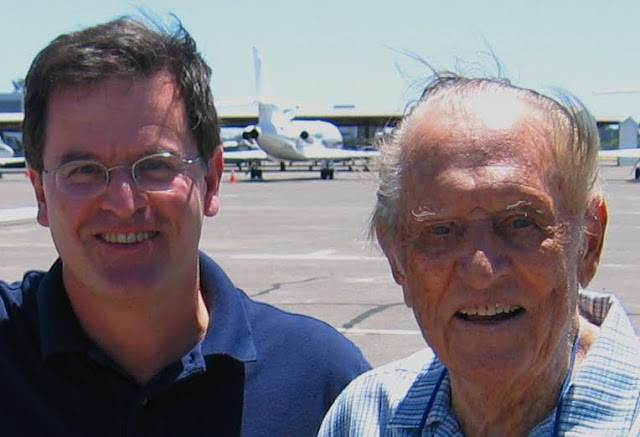 Art Linkletter (right in 2006), legendary star of radio and television, died peacefully at home with his family on Wednesday, May 26. He was 97 years old. Just one month earlier, while being honored at an event, he was asked what he considered his greatest life accomplishment. He responded - “Family”.

I had the extreme pleasure and fortune of knowing Art Linkletter and he was amazing not only what he did and how driven he was up until the end but his accomplishments, repertoire of jokes and humor and infectious positive warm likable personality were truly unique and wonderful. He will truly be missed.

Born in Moosejaw, Saskatchewan in 1912, Art was abandoned as an orphan and later adopted by a traveling minister and his wife. Fully intent on becoming a college professor, Art majored in English and Psychology and graduated from San Diego State College in 1934 with a B.A. degree. However during his last year in college, Art was offered a job as a radio announcer at Station KGB – a CBS outlet in San Diego. By the time he graduated, he was promoted to chief announcer and decided to remain in broadcasting.

Art was a star in show business for more than 75 years. His best known shows established records for longevity. People Are Funny ran on NBC-TV and Radio for 19 years and was rated in the Top 10 for more than 11 years. House Party ran on CBS-TV and Radio for 26 years and was one of the top daytime shows from the day of its first broadcast in 1945. It won 2 Emmy Awards, as well as numerous other nominations for awards. In addition, Art starred in and co-produced many television specials, as well as acting in half a dozen dramatic shows and motion pictures. Art also performed as the Master of Ceremonies for the opening day of Disneyland in 1955. He returned decades later to officiate at the fiftieth anniversary celebration of the Park on his 95th birthday. He was a well known author having written 16 books. His best known book was one of the top nonfiction bestsellers in the history of publishing – Kids Say the Darndest Things. The book led all sellers for 2 years and is #14 on the list of all non-fiction published in the United States. The format of amusing anecdotes for this book was taken from interviewing over 25,000 children on his program, “House Party”. His latest book How to Make the Rest of Your Life the Best of Your Life with Mark Victor Hansen was published in 2006.

Mr. Linkletter was on friendly terms with all of the U S Presidents from Harry Truman to George W. Bush. Many of them selected him to serve on a variety of committees and commissions. Some of those included: National Advisory Council for Drug Abuse Prevention; the Presidential Commission to Improve Reading in the U.S.; Ambassador and Commissioner General to the Australian World’s Fair and the National Committee on Volunteerism. In 2003 he was awarded the National Humanities Medal by President George W. Bush.

Art will be remembered for many things, but one of his favorite expressions was, “Things turn out best for the people who make the best of the way things turn out.”
Posted by Rich Saxton at 1:07 AM