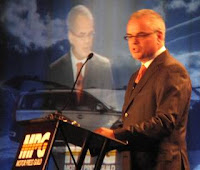 The MPG keynote speaker to kick off the 2010 Los Angeles Auto Show was Stefan Jacoby who, in August, was picked by Geely to run Volvo Car Corporation because of his success with Volkswagen in China. He attributed his move from President of VW of America to Volvo as liking challenges in the automotive industry believing he's the right man for Volvo's expected growth. In his speech, Jacoby gave a history of Volvo contributions to the auto industry and explained the U.S. sales slide from a 2004 peak of 140,000 vehicles to less than half that this year as a result of the financial crisis and a negative currency environment saying that things can only get better. He cited Volvo's C70 convertible, XC60, C30 and S60 as Consumer Reports' recommended vehicles. Jacoby promised to bring more attractive products from a leaner, better, smarter faster Volvo targeting to take this year's global production of 380,000 to 800,000 by 2020. On the green side, Jacoby says their electric C30 with a 150km range will be in a test fleet in California next week. Volvo will build a factory in China where sales are up 50% this year over 2009. More details on the China plan and Geely's mission for Volvo will be coming in the next few weeks according to Jacoby so stay tuned.