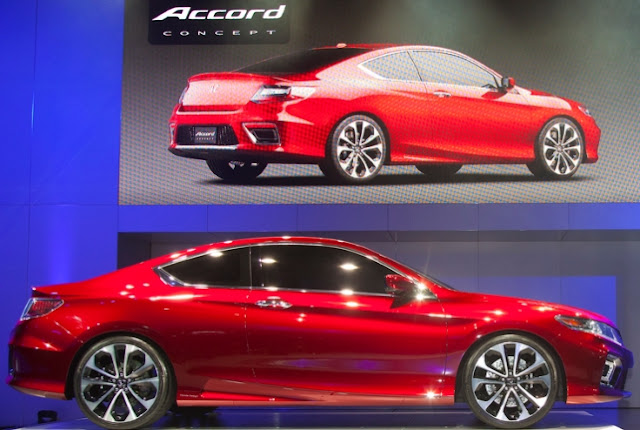 The all-new ninth-generation 2013 Honda Accord Coupe Concept will feature three all-new powertrains: the new Earth Dreams 2.4-liter, 16-valve DOHC i-VTEC® four-cylinder engine featuring direct- injection engine that will be paired to a 6-speed manual transmission or a new Continuously Variable Transmission (CVT) producing more than 181 horsepower and 177 lb-ft of torque. The 2013 Accord Sedan and Accord Coupe will also be offered with a re-engineered 3.5-liter, 24-valve, SOHC, i-VTEC V-6 engine, paired to a new 6-speed automatic transmission or an available 6-speed manual transmission.

Hybrid
The 2013 Accord lineup will also feature the first application of a new two-motor plug-in hybrid system to the Accord Sedan. The Honda two-motor hybrid system moves continuously through three modes - all-electric, gasoline-electric and direct-drive - to maximize driving efficiency and fuel economy. In all-electric mode, the 2013 Accord Plug-In Hybrid will use a 6 kilowatt-hour lithium-ion battery and a powerful 120 kW electric motor to achieve an all-electric range of approximately 10-15 miles in city driving scenarios and a top speed of 62 mph. Fully recharging the battery will take less than four hours using a 120-volt, outlet and less than 1.5 hours using a 240-volt charger. In the gasoline-electric hybrid mode, the Accord is powered by its fuel-efficient 2.0-liter, i-VTEC inline four-cylinder, Atkinson cycle engine, paired with an electric Continuously Variable Transmission (E-CVT). For more efficient high-speed cruising, the Accord Plug-In Hybrid can engage in a direct-drive mode, in which only the engine drives the front wheels. The Accord Plug-In Hybrid will launch next winter.
Posted by Rich Saxton at 10:31 PM