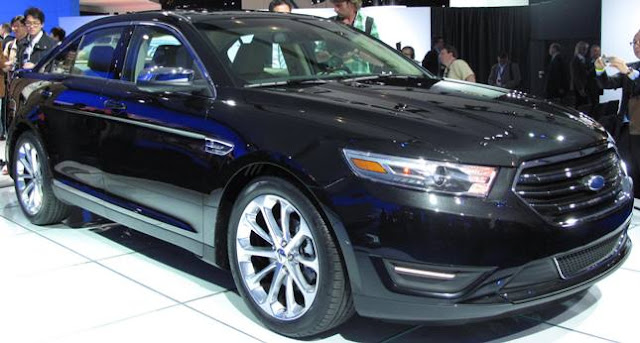 The new 2013 Ford Taurus is the first car in Ford’s North American lineup to offer the advanced 237 horsepower 2.0-liter EcoBoost™ engine, combining a turbocharger with gasoline direct injection for expected highway fuel economy of at least 31 mpg. The EcoBoost engine will deliver 250 lb.-ft. of torque. The standard Taurus engine is a 290 horsepower 3.5-liter V6 with the addition of twin independent variable camshaft timing (Ti-VCT), enabling increased fuel economy while delivering 27 more horsepower, a reduction in part-throttle emissions and increased responsiveness. Both engines are mated to six-speed automatic transmissions.

The Taurus technologies include SYNC® with MyFord Touch™, which replaces many traditional buttons, knobs and gauges with clear, colorful LCD screens and steering wheel-mounted five-way toggles. These screens can be personalized to display information relevant to each driver by using voice command, keeping the driver’s eyes on the road and hands on the wheel. We can expect to see the Ford Taurus early next year with its new front & rear.

The Taurus SHO with its distinct grill will have a 365 horsepower 3.5-liter EcoBoost V6, delivering 350 lb.-ft. of torque, mated to a six-speed high-capacity 6F55 SelectShift Automatic™ transmission.
Posted by Rich Saxton at 2:42 PM