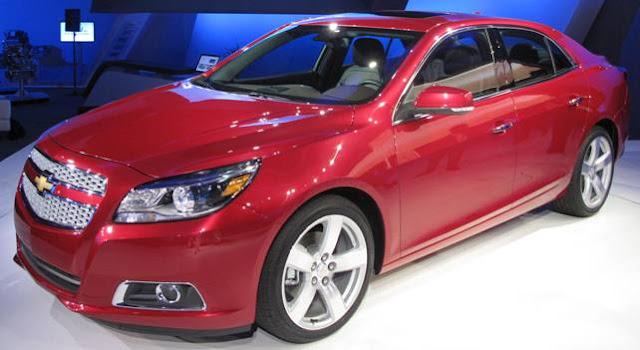 Chevrolet introduced the all-new 2013 Malibu ECO, based on the all-new, 2013 Malibu sedan, which will be sold in nearly 100 countries on six continents. Sales of the new Malibu begin with the ECO model in the United States in early 2012. The Malibu LS, LT and LTZ trim level offerings join the ECO in summer 2012. Pricing will be announced later.

Malibu ECO's eAssist system is mated to a 180 horsepower 2.4 liter Ecotec direct-injection four-cylinder engine and next-generation six-speed automatic transmission. It features eAssist™ "light electrification" technology which is engineered to deliver an estimated 26 mpg in city driving and 38 mpg on the highway without compromising performance.

An ECO gauge in the cluster continuously responds to driving behavior, encouraging fuel-efficient driving, while an Auto Stop Indicator on the tachometer informs the driver when the engine is in start-stop mode.  Malibu will include Chevrolet's new MyLink infotainment package at launch. It builds on the safety and security of OnStar and seamlessly integrates online services like Pandora® Internet radio and Stitcher SmartRadio®. MyLink integrates wireless connectivity through Bluetooth to enable hands-free use of selected smart phone apps while the device remains safely stowed. It features a high-resolution, full-color touch screen display designed to manage the number of steps required to complete a task.
Posted by Rich Saxton at 2:55 PM