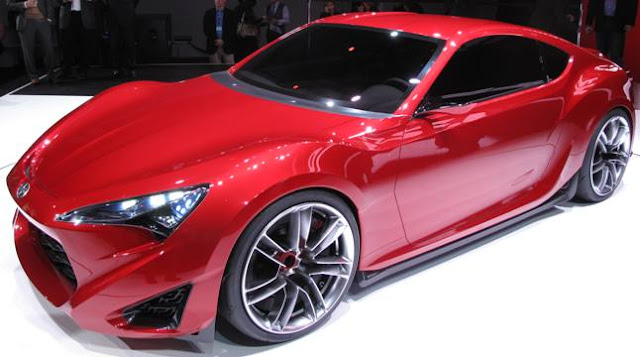 Scion unveiled the rear-wheel drive FR-S Concept sports coupe at the 2011 New York International Auto Show. The FR-S Concept, which stands for Front-engine, Rear-wheel drive, Sport; is Scion's definition of a rear-wheel-drive sports car using Subaru's 2.0-liter flat-four boxer engine that can mate with either a six-speed manual or a six-speed automatic transmission incorporating Toyota's D4-S injection system, which utilizes both direct and port injection, resulting in increased horsepower and torque throughout the entire powerband, without sacrificing MPG.

The FR-S is 168.2 inches long on a 101.2 inch wheelbase and 71.5 inches wide. Toyota says it's most inspired by the AE86 generation of the Corolla, better known as the Hachi-Roku, meaning "8-6" in Japanese but some will say Ferrari, especially with the rich coats of Code Red, the appropriately named color that consists of a custom blend of candy and a developmental additive from BASF called Mearlite SSQ.

It's a sharp departure from the typical Scion vehicle and a welcomed change. Scion FR-S gets my vote as the Star of the Show from New York this year.
Posted by Rich Saxton at 9:36 PM