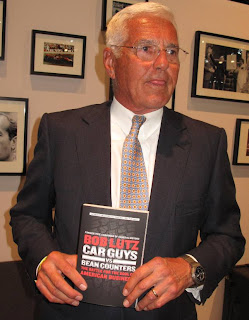 Bob Lutz, who has been an executive with many auto manufacturers, the latest as Vice Chairman of General Motors, is now a consultant for Lotus Cars and held a presentation at the New York Auto Show last week with media more intense on learning about his thoughts on GM than Lotus and Bob more than willing to deliver because he discusses much of that in his new book due out on June 8th. Lutz reviewed his thoughts on the demise of U.S. auto industry:
1. 1970 CAFE rules gave the Japanese an advantage because they already had small more fuel efficient engines and the U.S. was forced to change their large engine past.
2. The State Department allowed the dollar-yen foreign exchange rate to give the Japanese a $3-$4,000 per vehicle advantage.
3. The focus on financial results by management.
4. UAW with unrealistic demands that made the U.S. uncompetitive.
5. The media's pro-import bias.

We'll have to wait for the June 8th release of Car Guys vs. Bean Counters from Penguin Books to learn about Lutz' narration on his impressive career in the automotive business which is far from over.
Posted by Rich Saxton at 9:56 PM