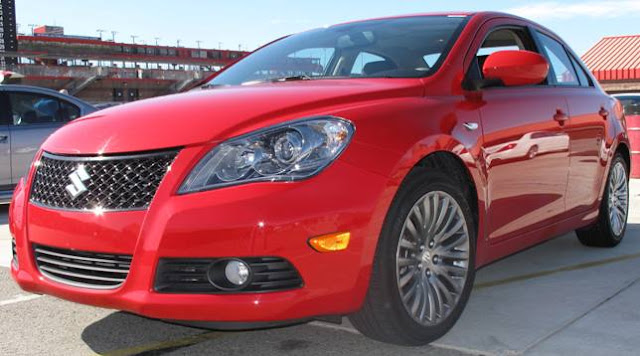 American Suzuki "Free Gas for Summer" sales promotion offers car buyers three months of free gasoline on retail purchases of any new 2010 Suzuki model, including the all-new Kizashi (above), SX4 SportBack, SX4 Sport sedan, SX4 Crossover, Grand Vitara and Equator. The Suzuki "Free Gas for Summer" sales program kicks off May 1  and runs through Aug. 31. Customers will receive a stored value debit card, ranging in value from $280 to $442, which can be used for fuel purchases. The amount of each stored value gas card is determined by several factors, including an assumed three-month timeframe for summer driving, the car's EPA estimated highway mpg, the Federal Highway Administration's estimated average of 1,000 miles driven per month and the U.S. national average price of one gallon of regular gasoline as determined by the U.S. Energy Information Administration.

The 2011 Kizashi Sport, shown in New York International a month ago, is offered on Kizashi GTS and SLS trim levels and goes on sale in the United States this August. Pricing will be announced closer to the vehicle's arrival in dealer showrooms. Features include a more muscular front fascia with chrome accents and lower grille, body side sill extensions, lower body side molding with chrome accents, a trunk mounted spoiler, custom light weight 18-inch alloy wheels and a 10mm lower ride height.

American Suzuki sales in March were a dismal 2,246, a 72 percent tumble from March 2009 and year-to-date sales through March are 5,661, a 63 percent drop from 2009. We'll find out Monday how the month of April treated Suzuki sales in the U.S. and we'll see how the just-announced free gas for summer promotion and the Sport version of the Kizashi will help move metal.