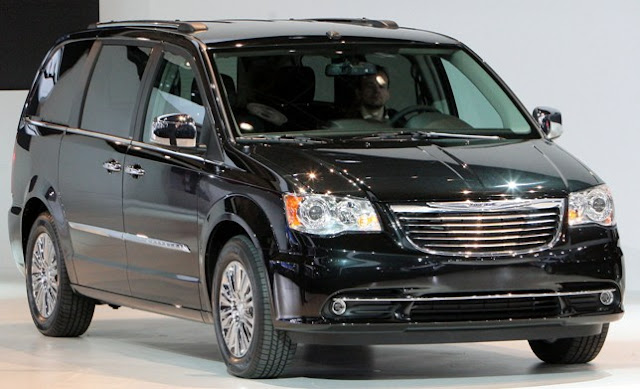 The new 2011 Chrysler Town & Country and Dodge Grand Caravan had their production launch this week in Windsor, Canada, as two of the 16 new or significantly refreshed products Chrysler has debuted recently. The Chrysler Town & Country was 2010's best selling minivan with 112, 275 sold, a 33 percent increase compared with 2009, and Chrysler's second best-selling vehicle last year. The new 2011 model was shown in Detroit last week and the Dodge Grand Caravan in Los Angeles in November.

The 2011 Chrysler Town & Country and Dodge Grand Caravan both have the all-new 3.6-litre Pentastar V-6 engine with up to 2 miles per gallon improved fuel economy of 36 MPG Highway . Both feature a new fuel-economizer mode that helps maximize fuel efficiency and more than 40 safety features including a new driver-side knee blocker airbag, front seat-mounted side airbags, side curtain airbags, electronic stability control and tire pressure monitoring.

The newest features include the Super Stow 'n Go seating and storage system, with larger, more comfortable seats and with a new, easy to use one-touch fold down function, the Stow 'n' Place™ roof rack system that lets owners stow the roof bows in the side rails when they're not using them and snap them easily into place when needed to reduce aerodynamic drag and wind buffeting and there's a heated steering wheel. The Uconnect system offers touch-screen and voice command for control of multiple media sources, navigation and hands-free phone.

Chrysler claims to be the inventor of the modern minivan with the Dodge Caravan and Plymouth Voyager first launched in 1983 followed by the upscale Chrysler Town & Country in 1989 adding up to 13 million sold since. In 2010, 460,154 minivans were sold in the United States, up 11 percent compared with 2009.