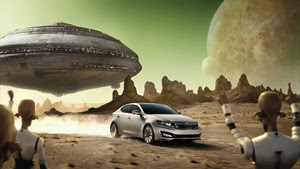 Kia returns with a new 60-second spot that will air in the first quarter of Super Bowl XLV titled “One Epic Ride,” and Kia will extend the campaign by giving away up to five Optimas through its “One Epic Contest,” which challenges consumers to solve a series of puzzles using clues provided in pre-Super Bowl and game day advertisements and social media postings. In “One Epic Ride,” people across space and time — from a police officer and an international villain to aliens and an ancient chief — will go to great lengths to snatch the all-new Optima from the clutches of others and put themselves behind the wheel. The Optima becomes an object of desire, and even Poseidon, the king of the sea, does his best to get his hands on the car. 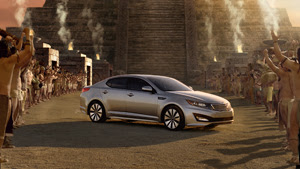 Created by David&Goliath, “One Epic Ride” demonstrates the extreme measures people will go to get their hands on a midsize sedan that defies the conventions of the segment with a combination of striking design, exhilarating performance and outstanding value not found anywhere else in the category.